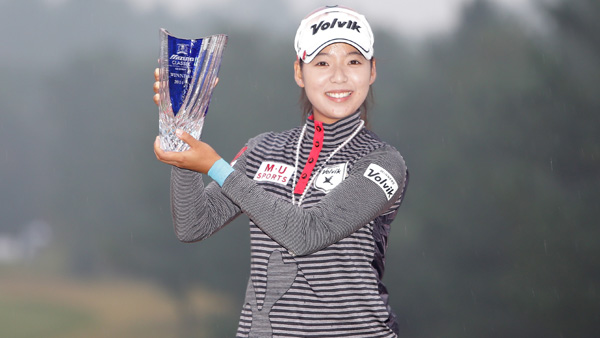 Lee sank a birdie putt to beat compatriot Ilhee Lee and Japan’s Kotono Kozuma. She shot 69 in regulation to finish tied at 11-under 205 with Ilhee Lee (70) and Kozuma, who also had a 69 in the final round.

“It was my first playoff ever so before I started the playoff I was a little nervous,” said Lee, who made her LPGA debut in 2012. “I just kept playing and made pars and birdies and the other players played really good. It was exciting when I made the last putt.”

The trio parred the first two playoff holes before an exciting third playoff hole where all three players made long birdie putts with the shortest being Mi Hyang Lee’s at 25 feet to keep the three-person playoff rolling.

The group exchanged pars again on the 4th playoff hole before Lee tapped in for the win and the $180,000 winner’s prize.

The 21-year-old is the seventh South Korean to win on the LPGA Tour in 2014, and the second consecutive after Inbee Park won in Taiwan last Sunday.

Prior to Sunday, Lee had only had three top-10 finishes, including a sixth-place finish at the Reignwood LPGA Classic last month in Beijing.

Laura Davies, who held a share of the lead after the second round and was bidding to become the oldest winner in LPGA history at 51, had a 71 to finish one stroke back of the leaders.

Karrie Webb of Australia and Morgan Pressel of the United States were also among the group of nine players tied for fourth place.

Defending champion Teresa Lu of Taiwan shot a 67 to finish tied for 13th, while second-ranked Stacy Lewis, the 2012 winner, had a 69 and was six strokes off the lead.

The Mizuno Classic was the final stop on the LPGA’s Asian tour. The next tournament is the Nov. 13-16 Lorena Ochoa Invitational in Mexico.