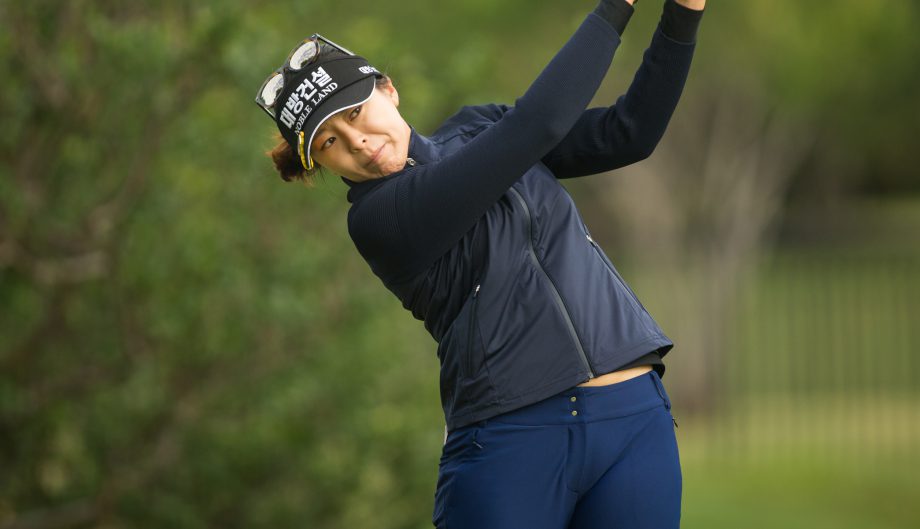 IRVING, Texas – Lexi Thompson was pleased with her first LPGA Tour round since a rules violation cost her a likely victory in the first major tournament of the year. And her Thursday round even included a consultation with a rules official.

Thompson shot a 2-under 69, leaving her four strokes behind leader M.J. Hur in the North Texas LPGA Shootout.

“I’m glad to be back in competition,” Thompson said. “All I’m focused on is the tournament that I’m at right now out here in Texas. I’m going to Japan next week. I’m forgetting about it all. It’s time to move.”

Hur had a bogey-free 65 on a blustery, sunny day at Las Colinas Country Club. Ariya Jutanugarn and Michelle Wie were a stroke back along with Katherine Kirk, Jennifer Song, Sung Hyun Park, Sandra Changkija and Marina Alex.

Hamilton’s Alena Sharp was the low Canadian at 1-under 70, good for 32nd. Maude-Aimee Leblanc of Sherbrooke, Que., was 2-over 73 to tie for 70th, Brooke Henderson of Smiths Falls, Ont., was grouped at 88th after a 3-over 74 round and Calgary’s Jennifer Ha was 4-over 75.

Three weeks ago in the ANA Inspiration in California, Thompson was given a four-shot penalty with six holes to play – two shots for replacing her golf ball in the right spot on the 17th green, and two more shots for signing an incorrect scorecard because it happened on Saturday and it wasn’t detected by a TV viewer until Sunday. She wound up losing in a playoff to So Yeon Ryu.

Golf’s ruling bodies just this week announced new limits on video evidence that could spare players from being penalized even if committing a violation.

Thompson started on the back nine early Thursday afternoon and made the turn at 2 under after birdieing the par-4 16th and par-5 18th. She bogeyed the par-4 first and birdied the par-5 seventh after leaving a 30-foot eagle putt a half-inch short.

The 540-yard par-5 seventh hole is the longest on the course. The 233-yard second shot by Thompson, who went into Thursday leading the LPGA Tour in driving distance at an average of 275.6 yards, came to rest just beyond the green in the fringe and between two sprinkler heads.

Thompson sought out the official, who confirmed that the local rule allows relief within two club lengths of the green. Thompson’s ball sat just beyond that distance.

Thompson’s one bogey was the one green that she missed.

“I hit a great second shot,” she said. “The wind just absolutely killed it. It looked like the ball was coming down backward.”

Hur, a South Korean who lives about 40 miles from Las Colinas in McKinney, hit the first 14 greens in regulation and 16 overall. The streak ended when her tee shot on the 390-yard, par-4 15th sailed right in the wind and landed in the water. She saved par with a 30-foot putt.

“Everything was really good today, and I really liked the putter,” Hur said. “The wind was swirling on every hole. It gave me a headache.”

She won the last of the two tour titles in 2014

Top-ranked Lydia Ko, who turned 20 on Monday, shot a 70 in her first round with the latest of 10 caddies since turning pro in 2014, Peter Godfrey. She recently dismissed Gary Matthews after only nine events.

“I kind of needed somebody with a little bit more positive kind of thing and more a nice, confident energy,” Ko said. “Hopefully, that will happen between Peter and I.”

Defending champion Jenny Shin bogeyed two of her three last holes for a 71.