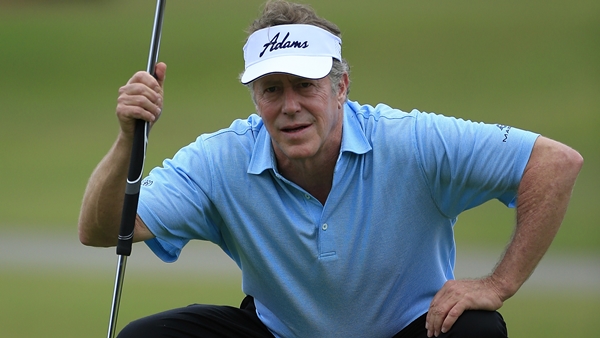 BOCA RATON, Fla. – Michael Allen won the Allianz Championship on Sunday for his sixth Champions Tour title, beating Duffy Waldorf with a two-putt birdie on the second hole of a playoff.

After Allen holed out on the par-5 18th, Waldorf had a chance to extend the playoff, but missed an 8-foot birdie putt after finding the front bunker in two.

Allen closed with a 3-under 69 to match Waldorf at 18-under 198 on The Old Course at Broken Sound. Waldorf, winless on the 50-and-old tour after winning four times on the PGA Tour, shot 67.

They each birdied the 18th in regulation and on the first extra hole.

In the first round, Allen had become the ninth player to shoot a 60 on the Champions Tour. A missed 4-foot birdie putt on the 17th hole Sunday cost Allen a chance to win in regulation.

Chien Soon Lu was third at 17 under after a 69. Tom Lehman was another stroke back after a 68.

Mark Calcavecchia shot a 64 to tie for 15th at 10 under. He had seven consecutive birdies, one off the Champions Tour record. Calcavecchia set the PGA Tour record with nine straight birdies in the 2009 Canadian Open.