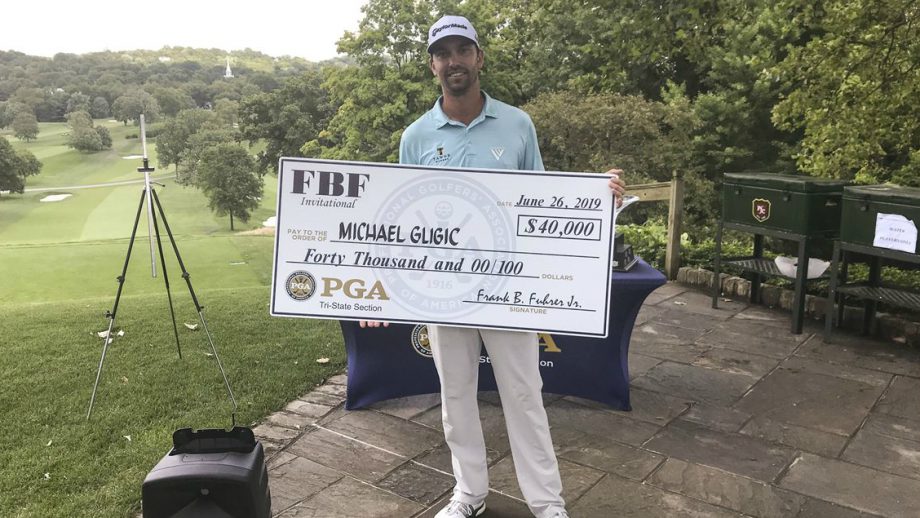 PITTSBURGH, Penn. – Michael Gligic emerged victorious in a playoff for the ages on Wednesday, winning the Frank B. Fuhrer Jr. Invitational at Pittsburgh Field Club.

It took eight playoff holes, but the Burlington, Ont. product outlasted the competition to win the PGA Tri-State Section event.

Gligic started the final day eight shots back of the leader, but made a breathless charge up the leaderboard. Gligic sunk two eagles to shoot a 3-under par 67, putting him at 1 under on the tournament and forcing a three-way playoff with Steve Wheatcroft and Ryan Lenahan.

The three players began a three-hole aggregate playoff (holes No. 16, 17 and 18) which eliminated Lenahan. Gligic and Wheatcroft then went head-to-head in a sudden death playoff, playing the par-3 18th.

The duo went stroke-for-stroke on the 215-yard No. 18, playing the hole five times before a winner was crowned. Wheatcroft, an American who competes on the Korn Ferry Tour, missed an 8-footer to give Gligic the victory.

This is the second year in a row Gligic has participated in a playoff at the Frank B. Fuhrer Jr. Invitational. He lost to David Bradshaw last year, and it was Bradshaw who was leading heading into the final round on Wednesday.

Gligic, 29, competes on the Korn Ferry Tour, and won the Panama Championship in February 2019.