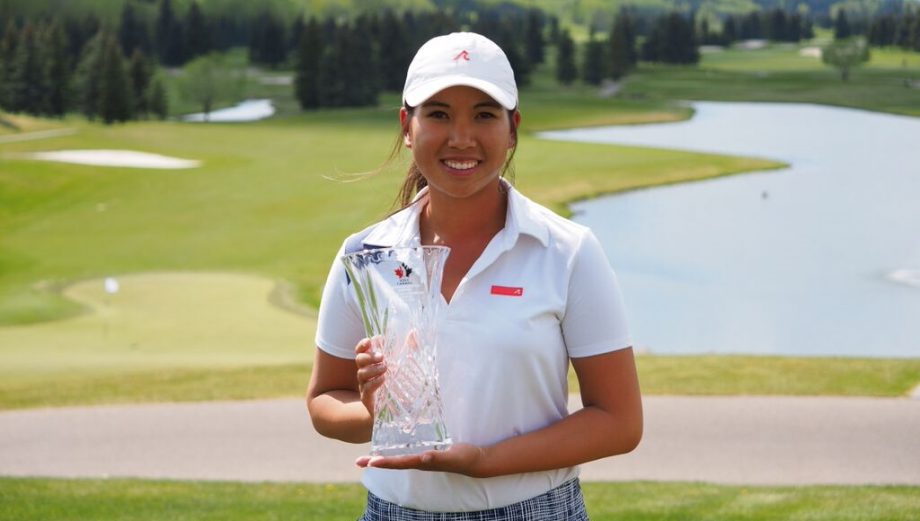 Calgary (Golf Canada) – For the second consecutive year, Michelle Piyapattra has won the season-opening event on the Canadian Women’s Tour. The Corona, California native fired a final round 3-under par 69 and tournament total 4-under par 140 at the Glencoe Golf and Country Club in Calgary to claim her second career Canadian Women’s Tour victory.

With the victory, Piyapattra earns the $10,000 winner’s cheque as well as the coveted exemption into the 2015 Canadian Pacific Women’s Open, August 17-23 at The Vancouver Golf Club in Coquitlam, B.C.

Piyapattra, who began the final round at 1-under par in the second last group, carded three birdies in a bogey free round to win by two shots over opening round co-leader Seul-Ki Park of Northbrook, Illinois.

In 2014, playing as an amateur, Piyapattra won the Canadian Women’s Tour stop at Morningstar Golf Club in Parksville, B.C. in a playoff, eventually making her pro debut at the 2014 Canadian Pacific Women’s Open at the London Hunt and Country Club in London, Ont.

“I played about [the] same as yesterday, but near the end my putts we’re going in; really a lot more putts were falling today,” said Piyapattra, a LPGA Symetra Tour regular who was playing in her fifth career Canadian Women’s Tour event. “Last year I won as an amateur so it’s nice to come back and win as a professional and get the exemption into the [Canadian Pacific] Women’s Open.”

Park, who began the day with a share of the lead, shot a final round 2-over 74 and tournamenttotal 1-under 143 to finish alone in second, while Lauren Mielbrecht of Gulf Stream, Florida and Kristen Park of Buena Park, California finished tied for third at even-par 144.

The shot of the day Wednesday went to Erica Rivard of Tecumseh, Ont. who used a 9-iron to ace the 140-yard third hole on the Bridges course.

With the victory, Piyapattra vaults to the top of the 2015 Canadian Women’s Tour Money List as well as the Jocelyne Bourassa Player of the Year Order of Merit.

Only two players (Michelle Piyapattra at 4-under and Suel Ki-Park at 1-under) finished below par for the championship at The Glencoe Golf and Country Club.

A total of 84 players including 42 international golfers competed in the season opening Canadian Women’s Tour stop in Calgary.

At season’s end, the five highest ranked players on the Canadian Women’s Tour Order of Merit will be awarded direct entry into the second stage of LPGA Qualifying School.