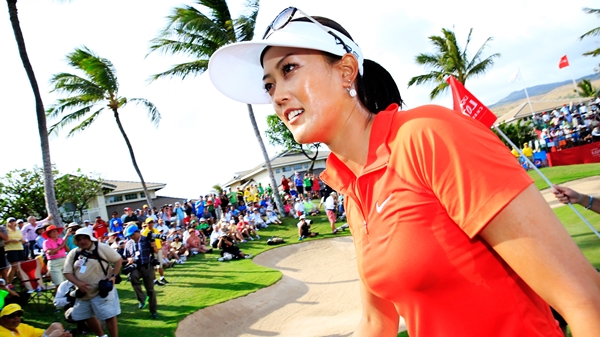 KAPOLEI, Hawaii -Michelle Wie rallied from four strokes back entering the day to shoot a 5-under 67 on Saturday and win the LPGA LOTTE Championship.

The 24-year-old American finished at 14-under 274 after coming into the final round trailing third-round leader Angela Stanford by four shots after Friday’s play. It was Wie’s third career victory on the LPGA Tour, and first since taking the CN Canadian Women’s Open in 2010.

And, Wie did it at home.

“I’m just having fun out there,” said Wie, who grew up in Honolulu. “I was out there and nervous. Every time I felt nervous out there, I was looking around, I felt there was no place I’d rather be.”

Stanford had her worst round of the tournament, shooting a 1-over 73 that put her at 12-under 276 and two shots behind Wie. Top-ranked Inbee Park finished third with an 11-under 277.

Wie came to LOTTE and her home state of Hawaii coming off a runner-up finish two weeks ago in the Kraft Nabisco Championship when she closed with a 71 for her best position of the season.

“The highlight of this week was to come back home,” Wie said. “There wasn’t just one moment. From the first tee shot that I made to the last putt, the aloha that I felt from everyone was unbelievable.”

Stanford, the leader after the second and third rounds at breezy Ko Olina, came out strong with a birdie on the par-4 third hole to set herself up at 14-under early in the day. A bogey for Stanford and a birdie for Wie on the par-4 sixth closed the gap to within a stroke.

The par-3 eighth brought Stanford, Wie and South Korea’s Hyo Joo Kim to tie at 12 under.

Stanford and Kim were unable to close that gap.

“She’s been playing great,” Stanford said. “She’s having a great year, so it was bound to happen. I just happened to be the one that caught the buzz saw.”

Trade winds continued to challenge golfers all day, gusting upward of 20 mph, according to the National Weather Service.

“Well, my caddy isn’t one for pep talks, but he gave a good one today,” Wie said. “He said, `It’s windy out there today, but play your game,’ and that’s really what I did. I didn’t try to force anything. I had a number in my head that I thought I needed to shoot, and I got it.

Jennifer Kirby dropped 13 spots Saturday after a 1-over par 73. The Paris, Ont. native finished tied for 13 at 2-over par 290 to pick up her second top 40 during her rookie season on tour.