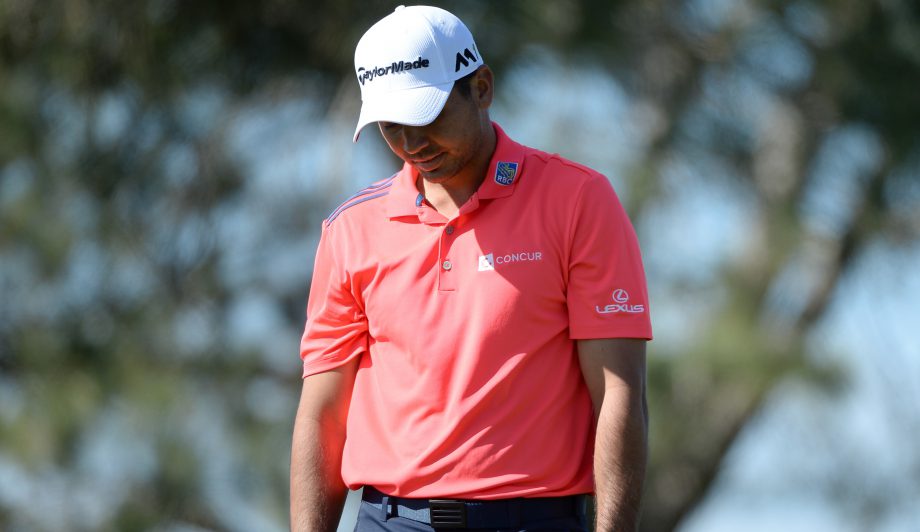 SAN DIEGO – Phil Mickelson had to leave the golf course to play one of his shots at Torrey Pines, an early sign of the mass exodus Friday in the Farmers Insurance Open.

By closing with three straight bogeys on the easier North Course, Mickelson missed the cut.

At least he was in good company.

Jason Day, the defending champion and No. 2 player in the world, missed the cut for the first time in nearly eight months. Also leaving early was Rickie Fowler, the No. 4 player in the world who was riding high from his victory five days ago in Abu Dhabi,

Throw in Justin Rose (No. 7 in the world), and another gorgeous day along the Pacific bluffs felt like Black Friday.

Not losing sleep over the surprising departures were Gary Woodland and K.J. Choi, who shared the lead going into the weekend; and Dustin Johnson, who made a risky escape on the one wild tee shot he hit and wound up one shot behind.

Woodland powered his way to a 5-under 67 on the South Course, which he prefers because of his length and the left-to-right shape of his tee shots. Woodland reached two par 5s in two and was just off the green on two other par 5s. He made birdie on all of them to help atone for a few mistakes on the back nine. He had to make a 15-foot putt on the par-5 18th to be the first player to post at 9-under 135.

Choi was a mild surprise, having not won on the PGA Tour in nearly five years. The 45-year-old South Korean shot his 67 on the North Course.

Their games are different, though they shared one thought – power always helps, but accuracy is paramount on the Torrey Pines courses with thick rough.

Johnson was pounding driver on the North Course and making enough short putts to move up the leaderboard. Then came a shout of “Fore right!” and the crackle of a ball through a Torrey pine on the seventh hole. He had a tree right in front of him, no path to the green except through a V-gap in the tree about a foot wide. Johnson managed, nearly made birdie and finished up his 66. He was at 8-under 136.

Mickelson never thought that would be an issue. He opened with a 69 on the South and was prepared to take advantage of the short par 5s on the North. Instead, he sliced his second shot so badly on the par-5 18th (his ninth hole) that officials had to measure to make sure it was not out-of-bounds. It was in play, by little more than the dimple of a golf ball, but it was under an iron fence.

Mickelson had to walk to the other side of the fence and punch at it with a hybrid into a bunker. He blasted out and three-putted for double bogey. Mickelson grew up in San Diego and has played Torrey Pines more than anyone. Asked if that was the first time he played from the parking lot, Mickelson replied, “Probably not.”

“After that good round yesterday on the South Course, I thought, ‘I’m going to go to the North Course and really light it up.’ I think I tried to force the issue a little bit,” Mickelson said. “When I wasn’t under par early, I kind of started to press a little bit. But that stuff happens.”

He didn’t seem bothered, and neither did Day.

The PGA champion got sick last Friday after a week in the desert working on his game and didn’t touch a club again until the opening round Thursday. He said his energy was gone, his swing felt off and it showed. Day shot 74 on the South and missed the cut for the first time since the Memorial.

The 13 players separated by three shots at the midway point featured a collection of long and medium hitters, which didn’t surprise Johnson in the least.

“If you look at the winners here, they’re all over the board, as far as length,” Johnson said. “But you’ve got to drive it straight. And right now I feel like I’m driving my driver very straight, so that’s definitely a key.”

In Canadian action, Adam Hadwin leads the charge. He’s 3-under and 6-off the lead, while Graham DeLaet is 1-under – 2-shots back of Hadwin. Nick Taylor finished 5-over and did not advance to the weekend.