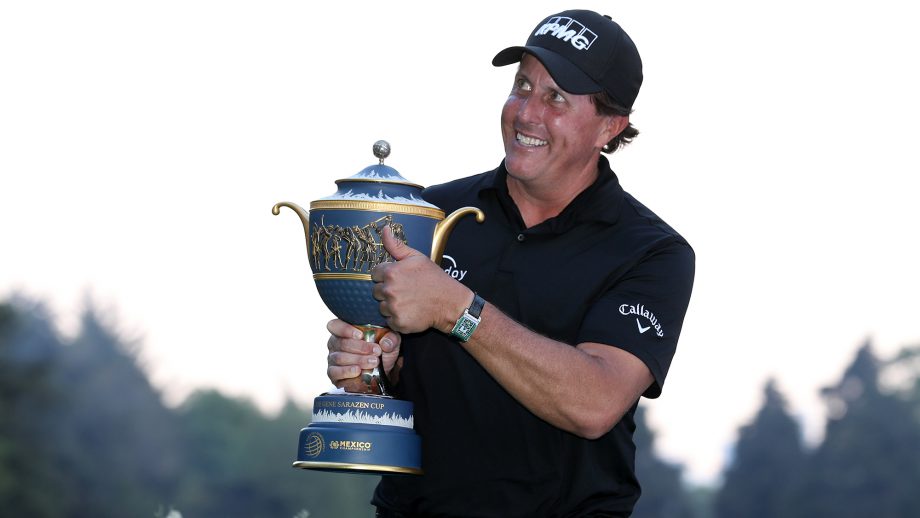 MEXICO CITY – Phil Mickelson ended the longest drought of his career with a playoff victory Sunday over Justin Thomas in the Mexico Championship, capping off a final round of lustrous cheers in thin air that included Thomas holing a wedge for eagle on the final hole of regulation.

Mickelson, who closed with a 5-under 66, won for the first time since the 2013 British Open at Muirfield, a stretch of 101 tournaments worldwide.

“I can’t put into words how much this means to me,” Mickelson said. “I knew it was going to be soon – I’ve been playing too well for it not to be. But you just never know until it happens.”

Thomas was coming off a playoff victory at the Honda Classic last week, and he delivered the biggest moment at Chapultepec Golf Club. Tied for the lead, his shot to the 18th from 119 yards landed in front of the pin and spun back into the hole for an eagle and a 64.

It almost was too good to be true. Thomas, who said Thursday he had never felt worse over the ball, had a 62-64 weekend and suddenly had a two-shot lead.

Mickelson, who turns 48 in June, responded with a two-putt birdie on the par-5 15th and a 20-foot birdie putt on the 16th to tie Thomas.

Tyrrell Hatton, playing in the final group with Mickelson, was stride for stride. He capped off a 3-3-3-3 stretch on the back nine with an eagle at the 15th. But on the final hole, Hatton missed the green to the right, chipped 10 feet by and missed the par putt for a 67 to fall out of a playoff.

Thomas went long on the par-3 17th hole and chipped to just inside 10 feet. Mickelson’s 18-foot birdie putt for the victory swirled around the cup, more agony for a 47-year-old who has seen plenty of it since his last victory.

Thomas, however, never got his par attempt on the right line.

Mickelson won his third World Golf Championships title and, just a month after being on the verge of falling out of the top 50 in the world for the first time in two decades, moves to No. 18 in the world.

Shubhankar Sharma, the 21-year-old from India who started with a two-shot lead, didn’t make his first birdie until the 12th hole. He finished with consecutive bogeys for a 74, six shots behind in a three-way tie for ninth. That will leave him on the bubble at No. 66 in the world for making it back to the next World Golf Championship, the Dell Match Play, in three weeks in Texas. Sharma first flies home for the Hero Indian Open next week.

Hatton tied for third with Rafa Cabrera Bello, who holed a bunker shot for eagle on the opening hole and was among six players who had at least a share of the lead.

Mickelson was the first player who appeared to seize control with a birdie on No. 10 to take the lead, and facing a reachable par 5 and a drivable par 4.

Instead, Lefty made it as entertaining as ever.

Going for the green in light rough with the ball below his feet, he hooked it deep into the bushes right of the green, and played his next one when he could barely see the golf ball. That stayed in the trees, and his fourth shot narrowly missed another tree before settling 10 feet away. He made bogey, and just like that, it was a sprint to the finish 7,800 feet above sea level.

Brian Harman and Kiradech Aphibarnrat both had chances until dropping shots at the wrong time.

Thomas made a bogey on the 17th hole twice on Sunday. He missed a 5-foot par putt in regulation that dropped him out of the lead, only to respond with the perfect shot at the right time. It just wasn’t good enough.

Mickelson, now with 43 victories on the PGA Tour and 46 around the world, made good on his pledge earlier this year that more victories were in store for him. He has four consecutive top 10s for the first time since 2005.

That also was the last time he had won in a playoff.

It all seems so long ago – playoffs, trophies, consistent play. Now he’s just more than a month away from the Masters, and feeling invigorated.