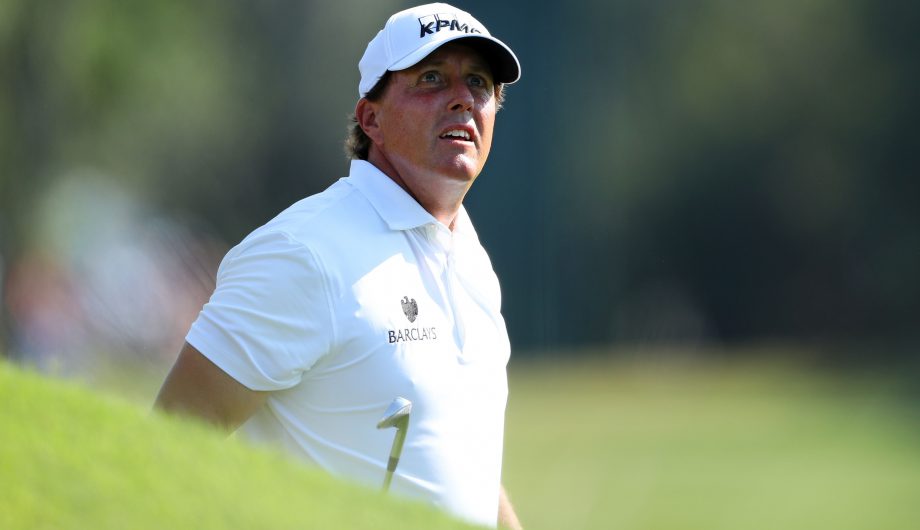 DUBLIN, Ohio – Phil Mickelson said he was disappointed to get caught up in a federal investigation that linked him to an insider trader scheme and that he needed to be more responsible for the company he keeps off the golf course.

It was his first public appearance since Mickelson was named in a federal complaint that accused Las Vegas gambler Billy Walters and Thomas Davis, a former corporate board member of Dean Foods Co., of making tens of millions of dollars in illicit stock trades.

Mickelson was spared criminal charges. The Securities and Exchange Commissioner alleges he benefited only from the misdeeds of others. Mickelson agreed to repay the $931,000 (plus interest) he made in a single trade of Dean Foods in the summer of 2012.

It was the second time in two years that Mickelson met the media at the Memorial to talk about stock deals instead of his short game. FBI agents met him after his first round of the 2014 Memorial to ask him about Walters during an insider trading investigation. Mickelson said that week he had done nothing wrong.

Walking into the same room after his pro-am round, he smiled and said, “This looks familiar.”

But he didn’t have much to say except that he felt a burden lifted that his part was over, and he thanked his family and corporate sponsors for their support.

“I’m disappointed to have been a part of that whole thing,” he said. “But after a thorough investigation, I’m pleased that it’s behind me. … I’m glad it’s over and it’s in the past. Ready to move on.”

Still to be determined was any action by the PGA Tour.

The tour in its player handbook has a section under “Conduct of Players” that says a player shall not “associate with or have dealings with persons whose activities, including gambling, might reflect adversely upon the integrity of the game of golf.”

Spokesman Ty Votaw had said May 19 when the indictment was announced that the tour was in the process of looking into it.

Mickelson said he had yet to meet with the tour and wasn’t sure if he faced any punishment.

“I’m not really able to talk about … I don’t know,” he said. “I don’t know anything to even comment on that.”

According to the SEC complaint, Walters called Mickelson on July 27, 2012, and they exchanged texts over the next two days. Mickelson bought $2.4 million of Dean Foods shares July 30 and July 31 from three brokerage accounts. The SEC said he had less than $250,000 in those accounts, had not been a frequent trader and had never bought Dean Foods stock.

The day after Dean Foods announced its quarterly earnings and that it was spinning off subsidiary White Wave Foods, the stock price went up 40 percent and Mickelson sold all his shares for a $931,000 profit.

The SEC also alleged that Mickelson had placed bets with Walters before the stock tip, Mickelson owed him money at the time of the trading and that he repaid Walters a month later “in part with the proceeds of his trading.”

As Mickelson was playing his pro-am, a New York judge set bail at $25 million for Walters, who pleaded not guilty to the insider trading charges.

“I have to be responsible for the people I associated with,” Mickelson said when asked about the PGA Tour policy on dealing with people who might reflect badly on the game. “Going forward, I’ll make my best effort I can to make sure I represent myself, as well as my family, as well as my companies, in the way that I want to and they deserve.”