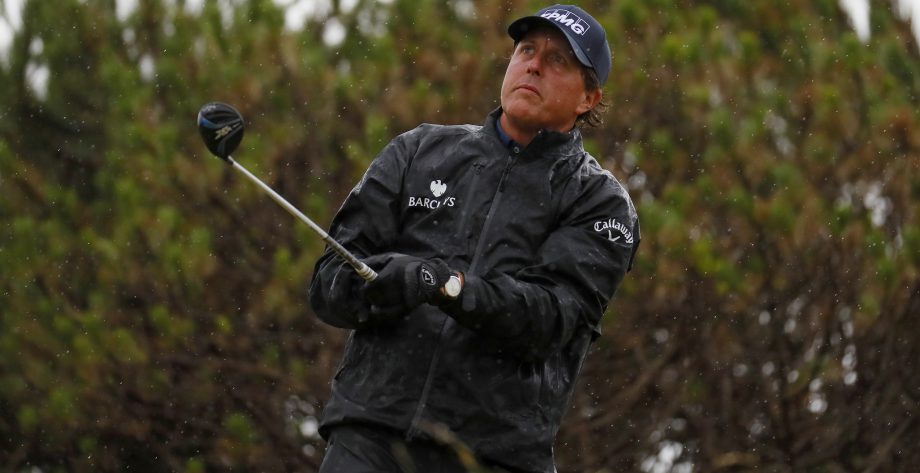 TROON, Scotland — Phil Mickelson wore a black rain suit that he didn’t need until he approached the far end of Royal Troon and already had stretched his lead. Henrik Stenson opened the curtains at his house expecting to see rain coming down sideways and was pleasantly surprised by the calm.

Good golf and the good end of the draw is tough to beat in the British Open.

Mickelson hit a wedge that spun back toward the cup until it stopped about two postage stamps away on the par-3 eighth hole, the signature shot in his 2-under 69 that allowed him to back up his record-tying start and take the 36-hole lead in a major for the first time in three years.

“I thought it was a good round to back up the low round yesterday,” Mickelson said. “I played kind of stress-free golf again. I made one or two bad swings that led to bogeys. But for the most part, kept the ball in play.”

He just couldn’t shake Stenson, who timed his birdies perfectly.

The Swede made three straight birdies before the wind showed up and the clouds began to spit rain. He added two more during lulls in the increasingly bad weather. And he wound up with a Friday-best 65 that enabled him to close within one shot of Mickelson.

“I was five back of Phil from yesterday, so of course I was hoping to gain a little,” Stenson said. “And the way it turned out, I gained quite a lot. It’s still early in the tournament, though. We’re only halfway through. But so far, so good. I’m happy with the way I played the course. It’s not easy out there.”

Try telling that to the players who had to endure an afternoon of gusts that topped 30 mph and rain so heavy at times it was hard to see.

“Some draws go your way,” Rory McIlroy said, “and some draws don’t.”

Just look at the leaderboard.

Mickelson was at 10-under 132, the best 36-hole total ever to lead at Royal Troon. Stenson, a runner-up to Mickelson at Muirfield in 2013, was one shot behind. Soren Kjeldsen and Keegan Bradley each shot 68 and were three shots behind.

The top 14 players going into the weekend all played Friday morning. Of the 26 players still under par, only four of them played in the afternoon.

The nature of links golf, and this championship, is getting the good side of the tee times. Mickelson was soaked when he walked off the course, though he managed to get in eight holes before the rain arrived. On the ninth hole, he had his caddie hold the umbrella over his ball on a 10-foot par putt, walking away at the last minute to watch his boss roll in into the cup, like he’s been doing all week.

Jordan Spieth? He was lucky to still be playing.

Spieth battled through the worst of the elements to play the final six holes in even par for a 75 to finish at 4-over 146. Two hours before he finished, that looked as if it would earn him a trip back to Texas. Instead, he made the cut on the number.

“It’s tough when we all realize before we go out that you’re kind of what would be the bad end of the draw before you even play your second round,” Spieth said.

Then again, he wasn’t sure it mattered the way he was playing.

“But at 4-over par, my game is not major championship-winning caliber those first two rounds,” he said. “It just made it pretty interesting and actually somewhat nervous on the last five, six holes because I’d really like to play the weekend.”

McIlroy got within five shots of the lead until the weather and a few bad shots gobbled him up, and the four-time major champion dropped four shots in five holes. He had to settle for an even-par 71 and was eight shots behind, along with U.S. Open champion Dustin Johnson (69).

Jason Day, the world’s No. 1 player, had a 70 and was among three players who broke par in the afternoon.

“I felt like I shot a low-career round out there today with just how tough the conditions were,” Day said.

Mickelson’s made his first bogey when he pulled an iron off the tee into the rough, missing a gorse bush by about two paces. He dropped another shot on the 15th when he pulled his drive into the rough and couldn’t reach the green. Those were the mistakes, offset by a 25-foot birdie putt on the 14th hole when he played his tee shot off the back side of a bunker and let it feed toward the hole.

He looked like a links specialist the way he used the ground. Then again, his name is on the silver claret jug for a reason.

And he wouldn’t mind seeing it there again.

“I don’t feel the pressure like probably a lot of players do to try to win the claret jug because I’ve already won it,” he said. “The desire to capture that claret jug puts a lot of pressure on. The fact I’ve done it relieves some of that. I would love to add to it, but having already done that was big.”

Only two other players have started a major with rounds of 63-69. One was Raymond Floyd, who went on to a wire-to-wire victory at Southern Hills in the 1982 PGA Championship. The other was Greg Norman, who shot 78 in the final round of the 1996 Masters and lost a six-shot lead.