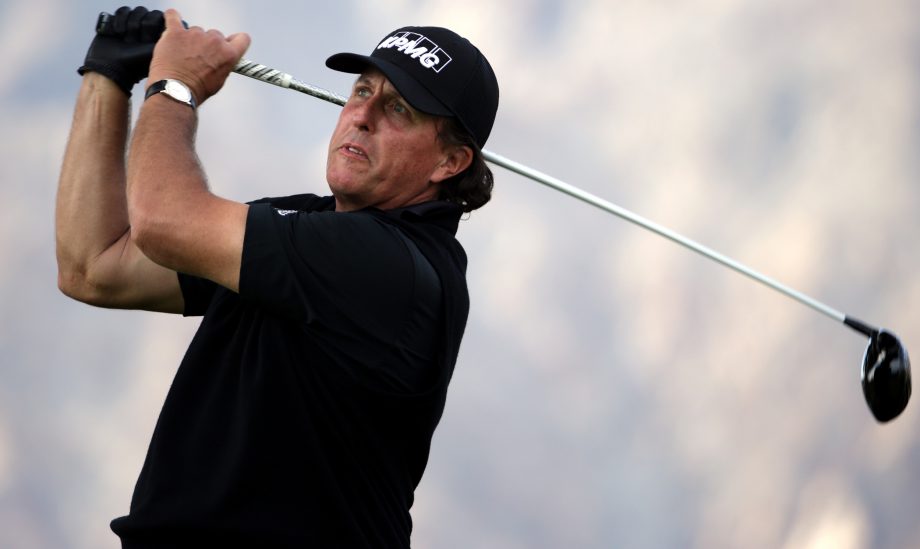 The 45-year-old Mickelson opened with a 4-under 68 at La Quinta Country Club in his first start since the Presidents Cup in October, playing a seven-hole stretch in 6 under.

“I’ve had a lot of time off,” Mickelson said. “It was fun to get back into the swing of it. We had a beautiful day here. Weather’s spectacular. Golf course was great. I had a good solid round.”

Lefty holed out for eagle on the par-4 eighth with a shot that spun back 15 feet, chipped in on the next hole for a front-nine 31 and added another birdie on 11. He three-putted for par on the par-5 13th and made two late bogeys to fall four strokes behind leaders Jason Dufner, Jerry Kelly, Jeff Overton and Anirban Lahiri.

The round was Mickelson’s first since splitting with swing coach Butch Harmon to work with Andrew Getson. The 2002 and 2004 champion is winless since the 2013 British Open.

“I felt good with my game,” Mickelson said. “I didn’t feel like I was fighting it. I was able to kind of let it go. I didn’t hit a lot of shots really close, I just hit it kind of OK. Didn’t putt great. But I had a couple shots that I holed out.”

The Stadium Course had a stroke average of 71.825 in perfect scoring conditions in the Pete Dye-designed layout’s first round in the event since it was dropped from the rotation after its 1987 debut. The course finally got another chance this year out of necessity when PGA West’s Palmer and Nicklaus private layouts dropped out.

Adam Hadwin had the best round on the Stadium Course with a 66. Only four players in the top 31 on the leaderboard played the course, with Ryan Palmer, Rhein Gibson and Si Woo Kim shooting 67.

“You give me 68, I probably would have walked away and not played today,” Hadwin said. “So, 66 bogey-free is a fantastic start.”

The Canadian birdied the par-5 16th, avoiding the 20-foot deep bunker on the left side of the green, and finished with pars on the island-green 17th and water-guarded 18th.

“I played Q-school here, so I got a pretty good feeling the way the golf courses play,” Hadwin said.

The 49-year-old Kelly had two eagles at La Quinta. He missed birdie putts on the final three holes, the first a 5-footer.

“In the past, this has been the tough golf course,” Kelly said. “So, it was strange just how the mindset changes when this becomes the so-called easier one and you have to get it.”

The Nicklaus Tournament Course is being used for the first time in the event. Overton had bad memories about the course from the PGA Tour’s qualifying tournament.

“I had very kind of sour vibes coming into this place, because I really like the ones we played last couple years,” Overton said. “I think I wound up playing 11 tournaments in a row my first year on tour and had to come back to Q-school. I played here and I was so tired and hit it so bad. … I just remember playing really awful.”

Dufner prepared for the courses before travelling to Hawaii for the Sony Open.

“I came out before I went to Sony and played these golf courses, both of them, twice,” Dufner said.

Lahiri, from India, played last week in Malaysia in the EurAsia Cup matches.

“Obviously, still feeling all the travel from coming from Asia, but really happy with the way I hit the ball,” Lahiri said. “I don’t think I missed a green all day.”

Defending champion Bill Haas had a 66 at La Quinta. He eagled the par-4 first hole.

“Ball-striking, I think I left a lot of room for improvement, which is a good sign,” said Haas, also the 2010 winner.

Weyburn, Sask., native Graham DeLaet is T18 at 5-under 67, while David Hearn from Brantford, Ont., opened with a round of 68. Nick Taylor, also from Abbotsford, finished the day at 2-under.

DIVOTS: CareerBuilder is in its first year as the title sponsor of the event long called the Bob Hope Classic, taking over for Humana. … Patrick Reed, the 2014 winner, had a 69 at La Quinta. … Stuart Appleby withdrew because of a back injury. Brice Garnett took his place and shot a 78 on the Nicklaus layout.