Mickelson off to strong start at Houston Open 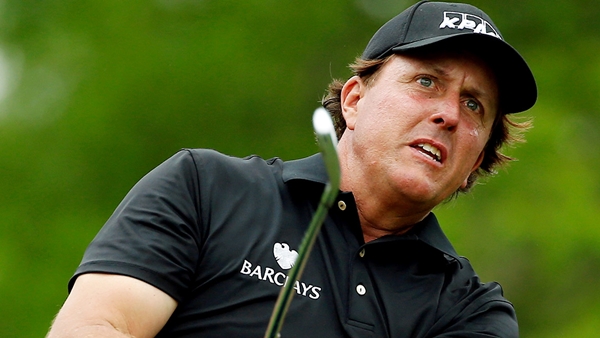 HUMBLE, Texas – Phil Mickelson did more than prove to just himself that he’s ready for next week’s Masters on Thursday.

The five-time major winner showed to everyone that he’s fully recovered from last week’s muscle pull and likely to be a factor in this week’s Houston Open as well.

Without so much as a practice round this week at the 7,441-yard Golf Club of Houston, Mickelson opened with a 4-under par 68 in Thursday’s opening round.

“I’m surprised because I was worried about the Masters,” Mickelson said. “I was certainly worried about Houston, but it healed a lot quicker. I felt great today; didn’t feel any pain or discomfort and didn’t even think about it.”

Mickelson is three shots back of first-round co-leaders Bill Haas and Charley Hoffman, both who finished at 7 under. Hass had five birdies on his back nine, while Hoffman needed just 27 putts to earn a share of the lead.

Keegan Bradley and Matt Kuchar lead a group of five golfers at 6 under. J.B. Holmes, Erik Compton and Jim Renner are also at 6 under, with 10 golfers at 5 under.

Of the 144 players in the field, 113 finished at even par or under on an overcast and occasionally misty day.

Former world No. 1 Rory McIlroy, playing in the afternoon and one of the five top-10 players in the world in the tournament, finished with a 2-under 70. Graham DeLaet matched McIlroy’s 70 and the pair are in a group of 17 players tied for 59th.

While Haas and Hoffman shared the lead after Thursday’s play, it was Mickelson – who was forced to withdraw during last week’s third round in San Antonio after pulling a muscle in his right side – who was the center of attention leading into next week at Augusta National.

Mickelson has won the Masters three times, the latest coming in 2010, but his status was in doubt following last week’s injury.

The left-hander, however, underwent treatment in the days following his departure from San Antonio – along with fitting in two days of light practice at Augusta National – and appeared in top ball-striking form on Thursday.

“One of the things I really worked on hard today was staying focused on each shot,” Mickelson said. “… I needed to play here this week and really challenge myself in that regard to give myself the best chance for next week.”

Opening on the back nine at the former Redstone Golf Club, which was renamed the Gold Club of Houston following an ownership change, Mickelson was bogey free despite needing 31 putts.

He made the turn at 2 under following a 16-foot birdie putt on the par-4 18th, and he birdied both of the par 5s on his back nine to put himself squarely in contention. Mickelson won the Houston Open in 2011, and the course’s Masters-like setup – including slick greens and tight rough – is a key reason he’s returned every year since.

“He was striking it, he was hitting it long and great,” Bradley said of Mickelson. “… He seems like it was feeling a lot better today than it was in San Antonio.”

Kuchar, who finished tied for fourth at last week’s Texas Open, had three straight birdies in the middle of his round on Thursday – highlighted by a 47-foot birdie putt on the 445-yard par-4 second hole.

McIlroy, one of five of the top 10 players in the world in the field, was as low as 3 under before a pair of bogeys on the back nine.

World No. 10 Dustin Johnson withdrew following an opening 8-over par 80.