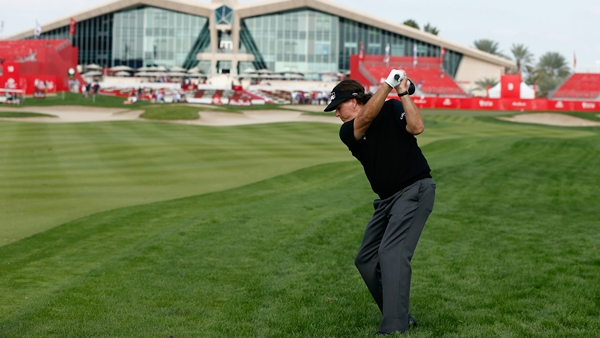 ABU DHABI, United Arab Emirates – Phil Mickelson surged up the leaderboard with a 9-under 63 to put himself in second place after the third round of the Abu Dhabi HSBC Golf Championship, while Rory McIlroy was hit with a two-shot penalty for a rules infraction that dropped him into a tie for fourth.

Mickelson barely made the cut but had the best round of the day with nine birdies and an eagle coupled with two bogeys to sit two shots behind leader Craig Lee of Scotland. Lee shot a 69 for a 12-under 204 total.

“I just love the fact I am in contention and have an opportunity in my first tournament of the year here in Abu Dhabi,” Mickelson said. “The biggest thing for me is that each day as the tournament has progressed I have felt a lot sharper and sharper.”

McIlroy thought he was alone in second place a stroke behind Lee after finishing his round, but tournament officials then ruled that he had taken a drop incorrectly on the second hole and adjusted his score to a double-bogey 7. That gave him a 70 for the round to sit one stroke behind Mickelson and Gaganjeet Bhullar of India (66).

McIlroy had to take relief on the second hole when his ball ended up on a gallery crosswalk and went on to par the hole, but was later told by the caddy of playing partner Ricardo Gonzalez that he had his left foot on the white line marking the drop area, meaning he had not taken “full relief” according to the rules.

Tournament officials reviewed the situation after McIlroy completed his round, with the golfer going back to the spot to show where he stood when he took the shot.

“I didn’t even know my foot was on the line,” McIlroy said. “We went back to see it again there and see where my divot was, and it was clear that I couldn’t have played the shot with my feet anywhere else. I guess I was so much into the shot I didn’t even realize. … There’s a lot of stupid rules and this is one of them.”

To make matters worse, McIlroy said his drop had actually given him a bad lie and that he would have benefited from dropping again.

“If anything, it was a disadvantage,” McIlroy said.

McIlroy had finished the round without a bogey, making his fourth birdie of the day on the 18th.

McIlroy took to Twitter to poke fun of himself following the rules breach.

Mickelson shot his lowest score since a 63 on the opening day of the Deutsche Bank Championship in September, falling one shot short of the Abu Dhabi course record.

The American birdied four of his opening six holes, eagled the eighth and then also birdied five of his inward holes, including sinking a 50-foot birdie putt at the par-5 last.

That came after he tried to reach the green in two shots but ended up beneath some trees to the left and needed a pitching wedge on his third shot.

“(I) gave myself a 45 to 50 footer that you don’t really expect to make too often but I had a good kind of feel on that one and it just rolled right I,” Mickelson said. “But then I was getting a little tired mentally those last few holes and I could tell it was early in the season so I just wasn’t as sharp mentally.”