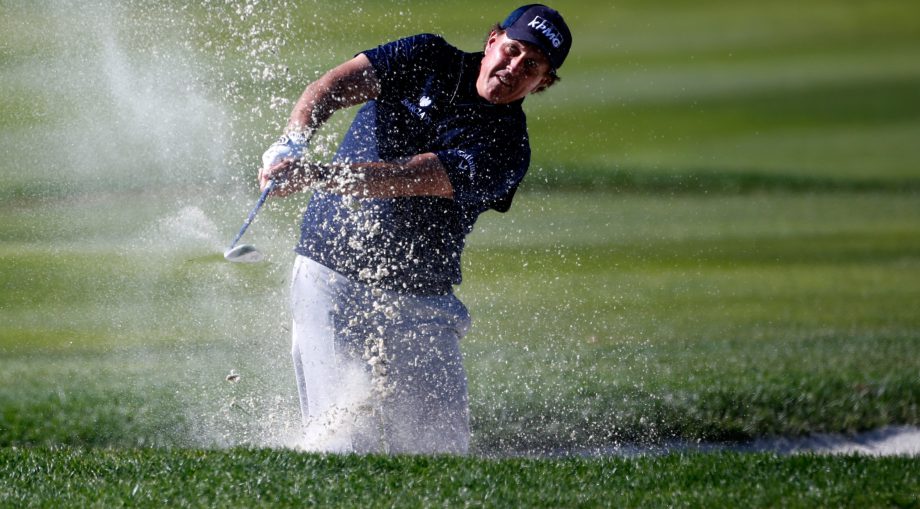 Mickelson took only 21 putts and shot a 6-under 66 to take a two-shot lead in the AT&T Pebble Beach National Pro-Am, leaving him one round away from tying the record with his fifth victory at this event.

“It’s fun to be back in the thick of it,” Mickelson said.

It’s his first 54-hole lead on the PGA Tour since the 2013 U.S. Open at Merion. Mickelson has gone 52 events worldwide since his last victory at Muirfield in the 2013 British Open that gave him the third leg of the Grand Slam. It is the longest drought of his career.

Freddie Jacobson had a 68 at Monterey Peninsula, which for the first time this week played the toughest of the three courses because of the brisk wind. He was three shots behind, along with Sung Kang, who had a 70 at Pebble Beach.

Jordan Spieth, the world’s No. 1 player, was happy to have a tee time on Sunday.

Spieth struggled on the par 5s for the third straight round, playing them at 1 over at Pebble Beach. He had to get up-and-down for par on the par-5 18th for a 74 to make the cut on the number. He has played the par 5s in even par for the week.

“I’m not in contention. It will be the first stress-free round that I’ve really had in quite a while where I’ve played a Sunday not having a chance to win,” Spieth said. “It’s not good, but at the same time, I think I can get into a groove and not lose any hair over the back nine. I’m going to fire at some pins.”

Mickelson got as much as he could out of his 66.

He played at Pebble Beach with the rest of the celebrities, which is a tradition on this course, except that he teed off on the back nine and was on the opposite end of the golf course from the dancing, clowning and raucous atmosphere on a gorgeous day once the fog lifted.

Mickelson’s pitch to the 18th went through the green, and he chipped in for a birdie to make the turn in 3 under. He had to scramble for par out of a bunker on No. 1. On the third hole, he drove into a fairway bunker and purposely played away from the flag, chipping just short of the green for a good angle at the pin.

He also had to get up-and-down for par on the short par-4 fourth hole. Those typically are the scoring holes, but he took off from there with three straight birdies, including a 20-foot putt on the 112-yard seventh hole, tougher than usual because of a firm green and a breeze at the back.

Even his birdie at the par-5 sixth was no picnic. Mickelson short-sided himself on his second shot and had to hit a flop shot over the bunker to about 4 feet. He closed with two solid pars (one from the front bunker on No. 8) and is trying not to look too far ahead to Sunday.

The next six players behind him on the leaderboard have combined for four PGA Tour victories. Mickelson is going for his 43rd.

Mickelson, however, wasn’t taking anything for granted. This was a good score on a tough day.

“It’s been awhile since I’ve been in contention and it would mean a lot to me to be able to play a good final round tomorrow,” he said. “And as well as I’ve been hitting the ball, the score was great, but the ball striking wasn’t indicative of how I’ve been hitting it. So I would like to get that dialed in for tomorrow’s round.”

PGA champion Jason Day had a 68 at Pebble Beach to get within six shots of the lead. Justin Rose was among five players to have at least a share of the lead at one point Saturday, reaching 13 under. He made four bogeys and no birdies over the final 11 holes, including going bunker-to-bunker around the 18th green for a bogey. That gave him a 72 and he was seven shots behind.