Mickelson’s back better than game in Phoenix Open 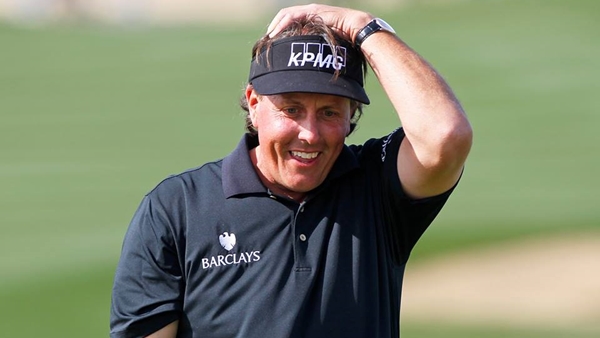 SCOTTSDALE, Ariz. – From the moment Phil Mickelson set foot at TPC Scottsdale early Thursday morning, it was clear that the back pain that sidelined him last weekend was gone.

It also was quickly evident that his game was a little off.

“My back is fine. My game was a little rusty,” Mickelson said after opening his Phoenix Open title defence with an even-par 71.

After effortlessly hitting his opening drive 300 yards down the middle on the par-4 10th, Mickelson dumped a 90-yard wedge shot into the left greenside bunker. He blasted 10 feet past the hole and sighed in relief when his par putt slid in.

A few minutes later on the par-3 12th, Mickelson found the water hazard along the right side of the green. His chip from the fringe stopped about 15 feet short and he two-putted for a double bogey. He three-putted twice, once for par and another for bogey.

“I threw away a lot of shots,” Mickelson said. “I made some careless swings. Hitting it in the water on 12 was just pathetic.”

He was seven strokes behind leaders Bubba Watson and Y.E. Yang.

“I got off to a poor start, played a couple over, and finished poorly,” Mickelson said. “In the middle of the round, though, I hit a lot of good shots and had a good little run, but it just wasn’t quite sharp. I wasn’t quite focused on every shot the way I need to be and let way too many shots slide.”

Mickelson first felt soreness in his back two weeks ago in Abu Dhabi, and pulled out of his hometown event in San Diego after making the 36-hole cut at Torrey Pines. He flew to Georgia to see back specialist Tom Boers and was told his facet joints locked up.

“It’s fine. Honestly, it’s no big deal,” Mickelson said. “It was a five-minute fix. I just have to be careful for a week or two as it heals up. It’s fine. Mobility is back. It’s just not a big deal. … It happens every now and then. Last time was about four years ago.”

After the double bogey on 12, he rebounded with 20-foot birdie putts on the next two holes, but three-putted for par on the par-5 15th after hitting a hybrid pin-high from 245 yards.

“Fifteen really stung,” Mickelson said. “It was only a 12- or 15-footer, and I am thinking eagle. I roll it 6 feet by and I miss it coming back. That was costly.

“Playing the last five holes at 3 over … that was really bad,” Mickelson said.

“I wasn’t as sharp as I need to be, for sure,” Mickelson said.

In his victory last year, he opened with a 60 _ lipping out a birdie putt on the final hole – and matched the tournament record at 28-under 256. The 43-year-old former Arizona State star is making his 25th appearance in the event that he also won in 1996 and 2005.

“It’s fun to be back here,” Mickelson said. “I love playing here.”

Watson birdied four of the final six holes. The 2012 Masters champion had eight birdies and a bogey in the afternoon session.

“This golf course, if your ball-striking is good, you can shoot some good numbers here,” Watson said after hitting 17 greens in regulation. “Hit a lot of greens, didn’t make too many mistakes, didn’t miss too many fairways. Just played solid.”

Yang birdied the final two holes. The 2009 PGA winner also had eight birdies and a bogey, playing the back nine in 6-under 30 in his morning round.

“I think you have to be aggressive,” the South Korean player said through a translator. “At the same time, you can’t be too aggressive. … You have to really balance it out, but you still have to be a little bit more aggressive than other tournaments.”

Scottsdale residents Pat Perez, Kevin Stadler and Matt Jones were a stroke back at 65 along with Harris English, William McGirt, Greg Chalmers and Chris Kirk.

“I guess I was a little juiced up on that tee,” English said. “I left myself with an impossible up-and-down.”

Graham DeLaet of Weyburn, Sask., fired a 4-under 67. David Hearn of Brantford, Ont., is another shot back at 68. Amateur Ki Taek Lee of Vancouver shot a 2-over 74. Mike Weir of Brights Grove, Ont., carded a 75, and Calgary’s Stephen Ames had a 76.

The crowd was estimated at 88,113, a record for the first round.