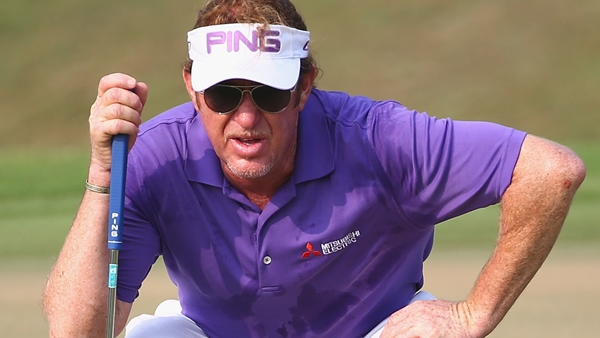 HUA HIN, Thailand – Miguel Jimenez bogeyed his last hole but still led the Thailand Classic by one shot after the second round at Black Mountain on Friday.

Fighting the flu, the 51-year-old Jimenez shot a 6-under-par 66 to lie at 11 under overall, edging his playing partner and local Kiradech Aphibarnrat, who eagled the par-five 2nd hole in successive days in a second straight 67.

“I am disappointed to make bogey on the last, but … you’re always happy when you’re under par – and the more under par you are, the happier you are,” Jimenez said.

“I have the flu, and I’m very bunged up and slept terribly last night, but apart from that I’m fine.”

Kiradech, 26 years Jimenez’s junior, also sprinkled his round with six birdies against three bogeys to be 10 under going into the weekend. He won his only European Tour title almost two years ago at the Malaysian Open. He has only one top 10 since then.

Richard Lee of Canada, who finished fifth in Malaysia last week, carded 67 to stay in contention for another week. He was two off the lead and tied with Scott Hend of Australia (68), and Thongchai Jaidee of Thailand (66).

“Just one bogey is good, especially on a course like this,” Lee said. “The greens are really tricky.

“I came off a win last year, and I’ve been in good form. I’m pretty surprised with the results.”

After an opening 64, overnight leader Michael Hoey of Northern Ireland settled with par and a total at 8 under in a four-way tie for sixth.