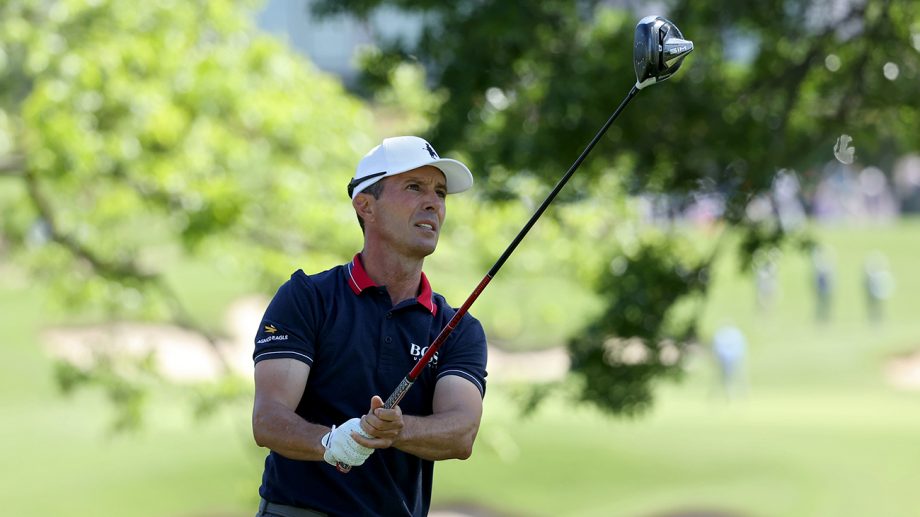 TULSA, OKLAHOMA - MAY 28: Mike Weir of Canada plays his shot from the 13th tee during the Second Round of the Senior PGA Championship at Southern Hills Country Club on May 28, 2021 in Tulsa, Oklahoma. (Photo by Dylan Buell/Getty Images)
Associated Press

TULSA, Okla., (AP) – Canada’s Mike Weir opened a four-stroke lead Friday in the Senior PGA Championship with a 5-under 65 on a tough Southern Hills layout that baffled most of the players.

That moved Weir to 7 under through 36 holes, with Steve Stricker (68), Rocco Mediate (69) and John Riegger at 3 under. Riegger had three holes left when play was called because of darkness at 8:31 p.m.

The 2003 Masters champion beat John Daly in a playoff early this month in the Insperity Invitational in Houston for his first PGA Tour Champions victory.

The left-hander made six birdies against one bogey.

His longest birdie putt was only 10 feet and he made difficult par saves on holes Nos. 7, 8 and 9 – his closing holes – to remain separated from the field.

“It was a really fun round of golf,” Weir said. “It’s a very demanding golf course, so when you have your opportunities and take advantage of them you feel good because you know you’re going to be fighting for some pars on some holes, which I was coming in and made a couple nice par putts to finish off the round nicely.

Stephen Ames of Calgary is tied for 24th at 3 over through two rounds, while David Morland IV of Aurora, Ont., is 8 over with four holes to play in the second round.

Weir’s tee shot on the par-4 seventh stopped a yard from bouncing into a creek, and he made a 9-foot putt to save par. He hit a long bunker shot on the par-3 eighth hole to a few inches. He polished it off with a 5-foot par putt on his final hole.

Stricker began and ended a long day with consecutive bogeys, but still managed to walk off the course with what was then a share of the lead at 3 under. He had 11 holes to complete from his first round and quickly went back out for the second round in windier but drier conditions.

Apparently the disappointing start and finish made it hard to remember all that transpired in between. Asked what club and distance he had on 10 when he holed out from the fairway for an eagle that took him to 5 under, he had a blank look and had to be reminded by the moderator that he made an eagle there.

“Oh. Forgot I did that,” Stricker said. “I had like 107 yards, I think to the hole and right in between clubs, so I just took a wedge and just tried to skip it up the hill there a little bit. And that’s just a bonus, you don’t expect to do anything like that. But it was a nice shot and got me going.”

Mediate also made an eagle from the fairway, hitting a 9-iron from 138 yards into the cup on his third shot on the par-5 fifth hole to move from 2 over back to even par. He then added birdies on Nos. 7 and 8 to play his last five in 4 under.

“I made a few bogeys, but holed a 9-iron on 5 that kind of turned the whole world around,” Mediate said. “It was just one of those things that happens. And then I finished pretty good after that. I was playing OK, a couple over, but it’s easy to do that around this place, this place is total championship golf. It’s really good.”

Stricker’s group included South Africans Ernie Els and Retief Goosen, who won the 2001 U.S. Open at Southern Hills. It drew a large share of the estimated crowd of 8,000 attending on a sunny day with temperatures in the low 70s and a light northerly breeze.