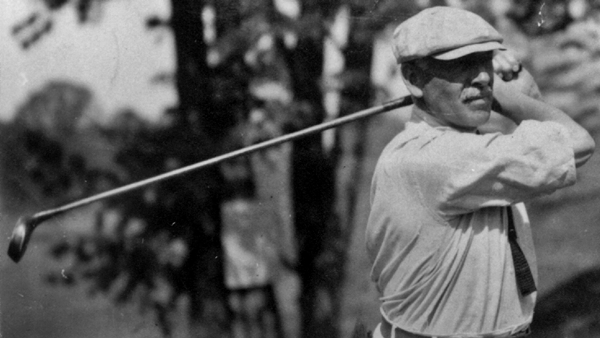 (Golf Channel) – Two years from now, when golf rejoins the Olympic Games for the first time since 1904, records will be broken. There have been some notable improvements in technology over that span of 112 years, so it goes without much wonder that on the still unfinished course 15 miles southwest of Rio de Janeiro, the world’s best players will set new Olympic marks in such categories as driving distance, total putting and, of course, scoring average.

One record, though, no matter how long golf remains a part of the Games and thrives in this role, will likely live on for eternity: Most creative gold medal presentation.

When George S. Lyon, a 46-year-old Canadian who didn’t take up the game until his late-30s, defeated H. Chandler Egan on the 34th hole of the match play final at Glen Echo Country Club the last time golf was contested, he was called to the podium to receive his award. A record-holder in the pole vault who also played baseball, cricket and tennis, Lyon was also known as a lovable jokester. He promptly stood up, then turned himself upside-down and walked on his hands to receive the golden prize.

It is similarly difficult to imagine such a momentous upset. Egan was the reigning U.S. Amateur champion, an astonishingly long hitter by that generation’s standards who had also won the pre-tournament long-drive contest. Comparatively, Lyon was a rube. He’d been playing golf for less than a decade, owned a bad case of chronic hay fever and worked his days as an insurance salesman.

In the final match, however, it was the sturdy Lyon who continually outdrove his younger competitor. When Egan hooked his tee shot on the challenging 16th hole into an adjacent pond, Lyon’s par was enough for a 3-and-2 victory, one that remains celebrated to this day with a plaque on that tee box.

It was the culmination of a busy week on Glen Echo’s grounds. The schedule included the aforementioned long drive competition, team events and even a contest on a lighted putting green. The main event, however, was the men’s tournament, despite some of the game’s top players failing to show.

“The entries for the Olympic championship were rather disappointing, particularly so in those from the East,” wrote Crafts W. Higgins shortly thereafter in The Golfers’ Magazine. “The known apathy of New Yorkers for any Western event should have been taken into consideration.”

The champion understood this sentiment and offered his usual humility. After accepting the gold medal upside-down, he would later tell the Toronto Star, “I am not foolish enough to think that I am the best player in the world, but I am satisfied that I am not the worst.”

Lyon’s extended run as the reigning Olympic golf champion will soon come to an end, but the memories endure at Glen Echo. The country’s oldest 18-hole golf course west of the Mississippi River features a flag with the Olympic rings flying just inside its front gates, a torch outside its clubhouse and various forms of memorabilia scattered throughout the property.

LondonOntarioGolf.com has announced that Canadian golf legend and 2003 Masters Tournament champion, Mike Weir, has been named the recipient of the 2014 London Ontario Golf Heart Award.

LondonOntarioGolf.com (est. 2005) celebrates its 10th season in 2014. In 2011, publisher and editor, Jeffrey Reed established the Heart Award to recognize members of the Greater London golf industry who unselfishly give back to the game of golf. The Heart Award recipient is honoured within the categories of golf professionals/instructors, golf mentors, golf course owners/operators, golf course architects/designers and members of the media.

Previous recipients of the London Ontario Golf Heart Award include: long-time Fanshawe Golf Club head professional Mike Olizarevitch (2011), who was instrumental in creating the Parkside Nine golf course where those who have suffered a stroke, those affected by heart disease, and anyone who is physically challenged can play golf; Fred Kern (2012), a long-time Thames Valley Golf Club head professional and Tyson Tour convenor; and Patty Howard (2013), the first female head professional at a mixed club in Canada, who after 40 years of service in the golf industry, retired this past December.

“Without a doubt, Mike Weir has made an unparalleled impact on local golf, extending beyond his roots in Bright’s Grove, Ontario,” said Reed. “I’ve covered Mike’s progress on the links since he was a two-time winner of the Junior Tyson Tour’s Les Thomas Trophy (1986-87). Because of his success on the golf course, including that memorable win at the 2003 Masters Tournament, and concurrently because of what he has done off the course with the Mike Weir Foundation, and Mike Weir Miracle Golf Drive, Mike has inspired members of the golf community in the Greater London area – including me – to achieve greatness in their own lives.”

“With my roots in Southwestern Ontario, it is an honour to be recognized by LondonOntarioGolf.com as the 2014 Heart Award recipient,” said Weir. “It is great that the London Ontario Golf Heart Award brings attention to the Heart & Stroke Foundation and promotes a healthy active lifestyle. As a PGA TOUR professional, fitness and heart health are of the utmost importance. With some of the best golf facilities in the province right in my backyard, as a kid it was easy to walk the course and stay active. The Greater London area is home to many premier courses, which provide a great test for junior and amateur golfers who have the ambition to play on the PGA TOUR one day.”

Born less than an hour west of London in Bright’s Grove, Weir honed his skills under former coach Steve Bennett’s watchful eye at Huron Oaks Golf Club. Weir won the 1986 Canadian Juvenile Championship, 1988 Ontario Junior Championship, and the 1990 and 1992 Ontario Amateur Championship. In 2010, he was inducted into the Ontario Golf Hall of Fame.

A graduate of Brigham Young University, Weir was the Canadian Tour (now PGA TOUR Canada) Rookie of the Year in 1993, and Order of Merit winner in 1997. In 1999, Weir won his first PGA TOUR title at the 1999 Air Canada Championship with a two-stroke victory over Fred Funk, becoming the first Canadian to win on Tour since Richard Zokol won the 1992 Greater Milwaukee Open, and the first Canadian to win on native soil since Pat Fletcher won the 1954 Canadian Open.

Weir emerged as one of the game’s brightest stars with his Masters victory, a dramatic playoff win over Len Mattiace. His breakthrough year on the PGA TOUR earned him the 2003 Lou Marsh Trophy as Canada’s top athlete of the year and the Lionel Conacher Award, given to Canada’s top male athlete of the year, an award he previously won in 2000 and 2001. In total, Weir has won eight times on the PGA TOUR, has competed as part of five Presidents Cup squads, and six times competed in the World Cup of Golf.

On a national level, Weir’s success and contributions through charitable work have attributed to two Order of Canada inductions (2007, 2009). In 2009, Weir was inducted into the Canadian Golf Hall of Fame.

Today, Weir lives in Sandy, Utah with his wife, Bricia, and their daughters, Elle and Lili – but he remains an ambassador for Canadian golf.

“London Ontario Golf is honoured to have Mike Weir as our newest winner of the Heart Award,” said Reed. “His support of the London and area community, and his status as the greatest Canadian golfer of all time have both equally inspired all generations of golfers in Southwestern Ontario. We look forward to celebrating with the Weir family this June.” Details of the June award ceremony will be announced soon.

(CBC News) -Most people expect that getting married or a promotion will make them happier. But how many realize that living near a park can do the same thing?

The world is currently on track for an estimated 1.3 billion people to become city dwellers between now and 2030, said Alan Logan, co-author of Your Brain on Nature.

With denser cities increasing pressure on green space, negative consequences for human health may be the result. Access to green space is clearly a public health issue, said Logan.

Nature exposure influences the natural killer cells that defend us against the common cold, influenza and cancer, he said.

In a Japanese study, a group spending three days in a forest setting produced significantly more natural killer cells in their bodies than a group that spent three days sightseeing in the city, said Logan. The positive results persisted for at least a month.

It’s not known exactly what causes this effect but phytoncides may be partly responsible. These are chemicals secreted into the air from trees, especially evergreens. They have been shown in the lab to stimulate the production of killer cells. They hover in greatest concentrations in natural settings, such as forests, about four feet off the ground.

Mental health and well-being is a critical modern public health issue, according to the World Health Organization, and depression is now the leading cause of disability in middle to high income countries. Increasing urbanization may be partly to blame because they tend to detach people from the natural environments they evolved in.

People moving to towns with more parks and gardens not only report greater well being than those without access to those amenities, but their improved mental health lasts for at least three years after their move, according to results of a study published in the journal Environmental Science and Technology by Ian Alcock of the University of Exeter Medical School.