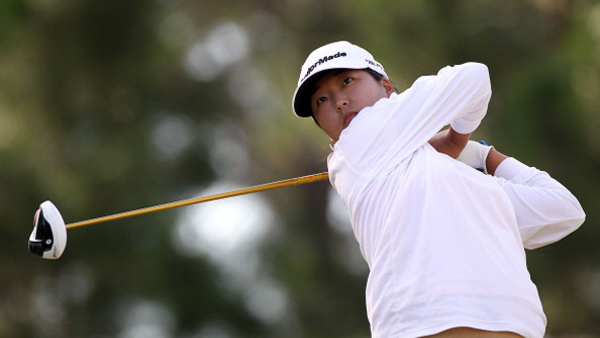 Kwak, the Patty Berg Memorial winner in Florida in early May, closed with a bogey-free 7-under 65 for a 12-under 204 total at Battle Creek Country Club.

“Today my driver was in the fairway every time,” Kwak said. “I missed one green. I had really short birdie chances and made them all.”

She earned $15,000 to jump from fourth to first on the money list with $55,476, with the top 10 at the end of the season earning 2015 LPGA Tour cards. She also would advance immediately to the LPGA Tour with a third victory.

Daniela Iacobelli had a 67 to finish second at 9 under.

“I’ve been hitting the ball great for a while now and have just been waiting for everything to come together and the last three days it was almost there,” Iacobelli said. “I could have done better yesterday, but it was a good week.”

Second-round leader Jean Reynolds was 7 under after a 75, and Kendall Dye (70) tied for fourth at 6 under with former Michigan State player Caroline Powers (67), Dawn Shockley (68) and Pinrath Loomboonruang (70).

“My putter was really behaving today,” Powers said. “I was playing better. I hit 16 greens, which always helps and when you hit a few putts it gives you confidence going into the rest of the round. It was a pretty easy day and a few of them fell.”

Natalie Gleadall of Stratford, ON shot 73, 72, and 70 to finish the tournaments the top placing Canadian in 17th.