Moe Norman film in the works 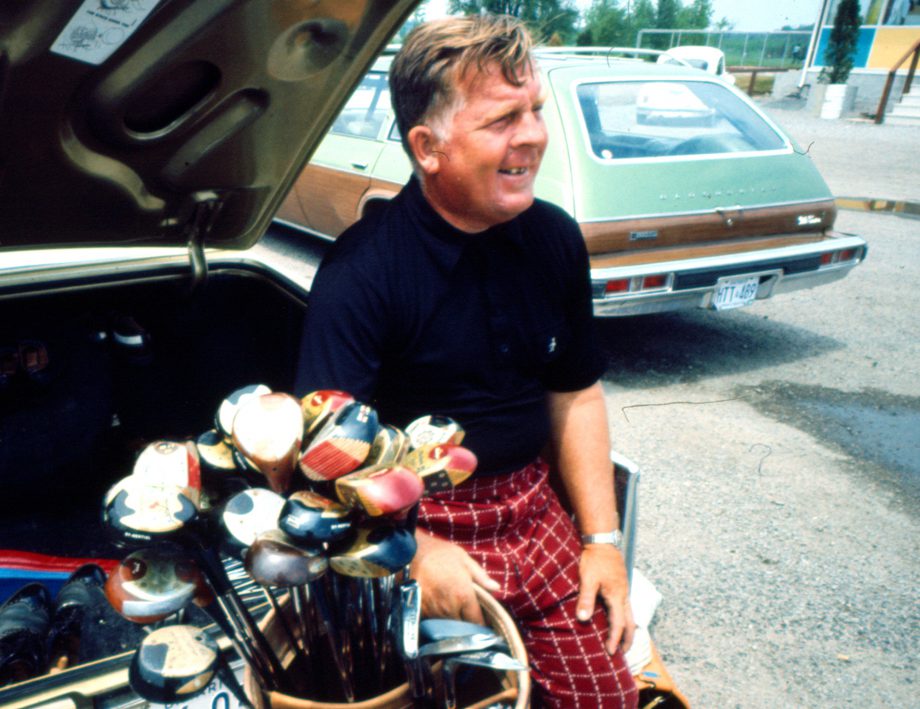 They were paired with the local 70-something postmaster named Des. When Des discovered his new friends were Canadian, he asked, “Tell me about Norman. What kind of guy is he?”

“You mean Greg Norman,” said one reporter, thinking that was whom Des meant, considering the Great White Shark had won his second Canadian Open at Glen Abbey a few weeks earlier.

Moe Norman never had been to Ireland. But Des the Postmaster knew about the legendary Canadian golfer.

Every clubhouse in North America has a favorite story about the Canadian Golf Hall of Famer. And even though he passed away 11 years ago this month, his legend stretches worldwide.

It certainly has extended to Eastern Canada, where David Carver sat around the family dinner table one night 17 years ago and listened to his father and brother go back and forth with stories they had heard about Norman.

David Carver wasn’t into golf, but he certainly knew a good story when he heard one. He already was a successful concert promoter, but after listening to so many Norman tales, Carver was inspired to make a film.

Carver has 25-plus years in the concert business. He has worked with massive acts like Tom Petty and The Heartbreakers, Bob Seger and The Silver Bullet Band, Aerosmith, Van Morrison, Rod Stewart, Bon Jovi, Bryan Adams, ZZ Top and Bob Dylan.

In what Carver describes as the first of many “the universe unfolding as it ought,” he had just completed a tour with Dylan and was in L.A. visiting with songwriter’s agent, sharing some of the Moe Norman stories he had heard.

Carver asked the agent if he had any connections in the film division that could help him with his Moe Norman project. The agent asked for something in writing so Carver cobbled together a synopsis on the Norman story.

“It was like somebody or something else channeled through me to write the four-page outline,” Carver said.

The agent forwarded the outline and a note came back from Academy Award-winning director Barry Levinson: (1) Hire an entertainment lawyer; (2) That it was a great story; and (3) Obtain permission from the Norman family.

The problem was another writer already had purchased the movie rights to Norman’s story, but over the years was unable to put a screenplay into production.  Eventually the rights expired and Carver’s 17 years of tenacity were about to pay off.  He was back in the proverbial picture.

Carver has hired a writing team and hopes to have a rough draft of a screenplay in his hand by the end of December. Production on Moe’s story could commence in the spring.

“I know what people are thinking, ‘here we go again,’” said Gus Maue, a close friend of Norman’s and along with Ernie Hauser and others are the executors of Norman’s estate. “But I feel pretty confident with David we’ve got to a point where it’s going to happen.”

Carver remarked that he could not have put the film idea together without the help and storytelling ability of Maue, Hauser, Norman’s twin sister Marie Kelly and his brother Richard.

“More than 25 people have called me or wrote me stories about Moe,” Carver said. “This will be a story about more than golf.  There are elements of redemption, vindication, triumph over adversity and the capacity of an individual to grow and change as a person, and in the case of Moe, cause those around him to grow and change. Moe lived much of his life swimming upstream. I think that’s a feeling that resonates with most of us at one point or another.“

Moe was born on July 10, 1929 in Kitchener and passed away at age 75. He and his twin sister Marie were the second and third in a family of six children. His father Irwin was a furniture factory upholster.

Moe fell in love with sports at an early age. He was a .610 softball hitter and an accurate, hard shot in hockey. He was introduced to golf as a caddy at age 11.

He had little interest in school, except math, and was expelled in Grade 9 for skipping school to caddy or play golf.

Those close to Norman believe he had a form of autism that stemmed from a toboggan accident when as a child. He battled an inferiority complex that ran as deep as the famed Principal’s Nose bunker at the Old Course in St. Andrews, Scotland.

Unfortunately, the eccentric golfing genius often was judged by his peculiar mannerisms and appearance – a 5-foot-8 Popeye-like figure who wore turtlenecks on steamy summer days and flashy pants that always were an inch too short – rather than his ability.

Some talents like Lee Trevino, Tom Watson and Paul Azinger love to laud Norman’s ball-striking ability. But Norman never felt he fit in until later in life when he exhibited a desire to better relate to others and discuss more openly about the lessons he learned.

“It’s never been an easy road for me, old Moe Norman,” he once told me. “But the only thing I’ve ever wanted to do in life was to be the best ball striker in the world, to do something that other people wished they could do.

“I still go to bed every night wondering how many times people mentioned my name during the day.”

If Carver had his way, because of his feature film, more people will mention the name, Moe Norman.