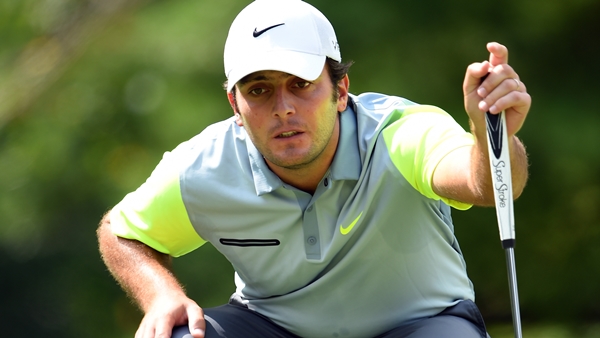 TURIN, Italy – Home favorite Francesco Molinari and Austria’s Bernd Wiesberger both shot 66 to share the first round lead at the Italian Open on Thursday, while Stephen Gallacher’s bid to earn a late spot on Europe’s Ryder Cup team ran into trouble.

Molinari – who was born in Turin – and Wiesberger managed six birdies each in their bogey-free rounds to finish six under par. They lead a group of five players, including early leader John Hahn of the United States, by one stroke.

Gallacher, who needs a top-two finish to dislodge former U.S. Open champion Graeme McDowell from Europe’s team, opened with a par-72. The Scot is the only player still capable of moving into the automatic Ryder Cup places in the final qualifying event.

European captain Paul McGinley said Molinari is “very much in my mind” for one of the three Ryder Cup wild cards he will announce on Tuesday, while the man himself thinks he needs a second Italian Open win on Sunday to guarantee a third consecutive cup appearance at Gleneagles next month.

”I had a chat with Paul when he got here and I think the good thing is that he knows what I can bring to the team because he has seen me as vice-captain on the last two teams,” Molinari said.

”But it’s up to me to prove that I really want it and am playing well enough. I think anything less than a win would not be enough so I have to aim for that.”

Gallacher headed straight to the range after a round featuring four birdies and four bogeys. The 39-year-old Scot squandered a good start after almost holing his approach to his second hole of the day.

“I’m a bit disappointed because I threw away a couple of shots midway through my round, but it’s OK for the first day and I am only one good score away from the top of the leaderboard,” Gallacher said.

“I know I have to finish first or second, that’s not going to change, so I’m not putting any pressure on myself. Once you get out on the course you just try to birdie every hole. That’s the easy part. It’s when you finish you think about the Ryder Cup.”