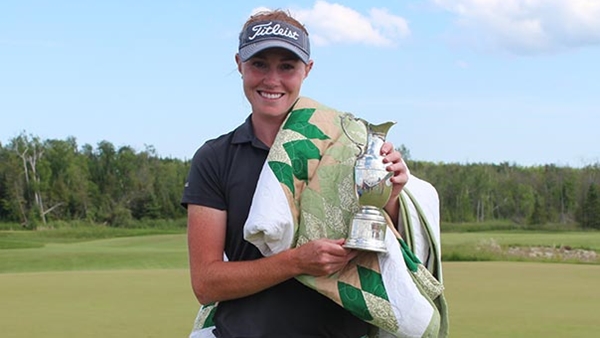 “This is a really special place to me and to win here with family ties is amazing,” said Aronsson, whose ancestors came from Sweden and settled in Escanaba. “I love the resort. I love the course. It is just spectacular and the fans were outstanding. I just had a blast all week and that contributed a lot to the win.”

Parks finished with a 75.

“Going neck and neck with Sadena was really cool,” Aronsson said. “I think she is an incredible athlete and she is a former teammate of mine. I think playing with her yesterday kept me in it. … It’s pretty cool to finish one and two for two Huskies.”

Katie Kempter and Canada’s Sara-Maude Juneau tied for third at 1 over. Kempter finished with a 75, and Juneau shot 74.

Two other Canadians cracked the top-15, including Maude-Aimee LeBlanc who finished tied for fifth at 2 over and Samantha Richdale who tied for 14th at 4 over.