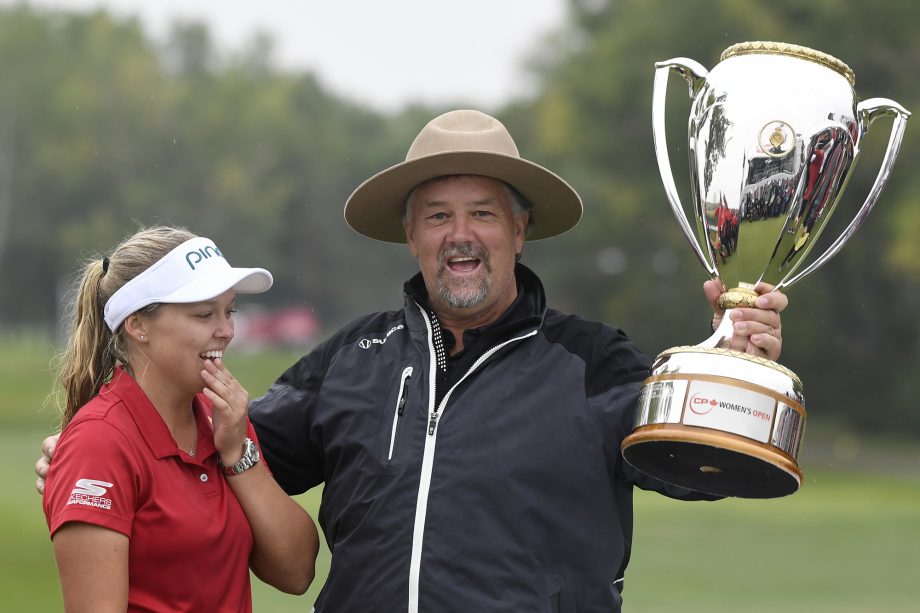 REGINA – When Brooke Henderson sank her final putt on the 18th hole to win the CP Women’s Open, her father Dave ran onto the course and started to shower her with champagne.

He said after the victory on Sunday that he then congratulated his daughter and told her what an unbelievable feat that she had just accomplished.

“I’m sure it will take a lot of years for that to sink in with Brooke and her to reflect on it,” Dave Henderson said. “It’s a momentous occasion and history was set here today at Wascana Country Club.”

Henderson shot a final-round 7-under-par 65 for a 21-under 267 total and four-shot victory over American Angel Yin.

It’s the first time a Canadian has won the national Open since Jocelyne Bourassa was victorious in Montreal in 1973.

“I tell ya, golf in Canada just grew,” Dave Henderson said. “It grew across the country in every capacity today.”

Henderson hit four birdies in a row at one point on the back nine to pull away.

Her sister, and caddie, Brittany said that she was trying to hold in tears before the final putt that sealed the victory.

“I didn’t want to start celebrating too early and I think she didn’t either even though we were up three going into the last hole, it’s golf and anything can happen,” her caddie said. “Until that last putt went in, we didn’t really believe it. But now it’s just amazing.”

Henderson said that she thought of her family as she claimed victory and all the hard work that they’ve put in to help her along the way.

She added that winning the title was a “big dream and a big goal for all of us.”

“I thank God for this win and just the many opportunities that I’ve been given,” Henderson said. “My grandfather passed away this summer and I really think they were helping me today.”

It was the seventh career LPGA Tour win for the 20-year-old from Smiths Falls, Ont., and second victory this season.

The win also moved her one behind Sandra Post’s record for all-time victories by a Canadian.

“I don’t think anybody could have predicted that,” her father said. “We were just plugging along and good lord willing, we’ve got that many so far.”