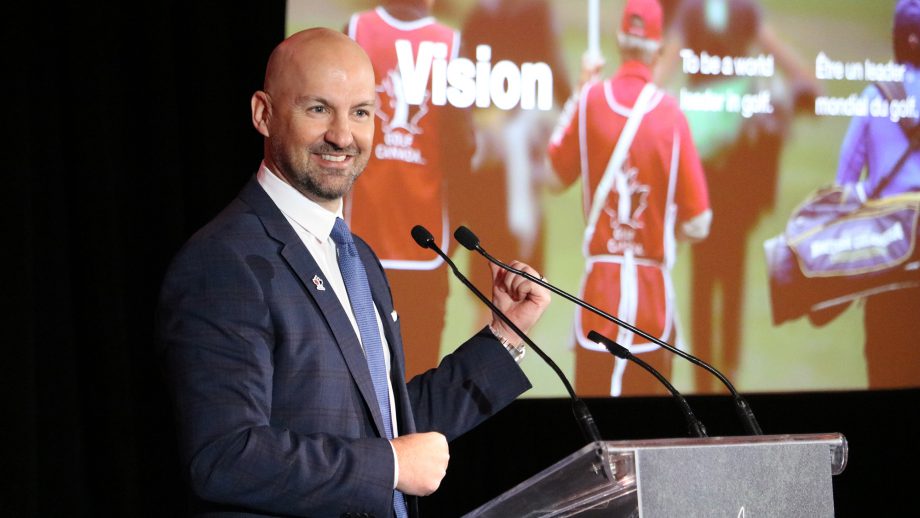 PONTE VEDRA BEACH, Fla. – On the 18th green at TPC Sawgrass, Laurence Applebaum was laughing and chatting with whomever was around.

Usually standing on that intimidating tee – with water up the left-hand side and a thin fairway – you’re not happy at all. But Golf Canada’s CEO caught Canadians Nick Taylor and Corey Conners coming through in the final hole of their practice round, and how could he not be happy?

Taylor and Conners were wearing shorts. Applebaum was clad in a grey monotone ensemble, the pop of colour reserved for the red in the Golf Canada logo on his shirt. It was like a scene you might stumble upon at any golf club in the country when a trio of friends got together at the end of a round – it just so happened that two of the three are some of the best golfers in the world.

“They’re true professionals on the PGA Tour,” said Applebaum on the veranda of the iconic clubhouse at TPC Sawgrass. “It seems like the vibe amongst those guys is that every week there is a different guy who is finding his groove. Roger Sloan, for example, had a couple great weeks, and to have Adam Hadwin leading that class… it’s so good to have those guys on the Tour and they’ve been great ambassadors for golf in Canada.”

The Canadians in the field this week at The Players Championship – Adam Hadwin rounds out the Canadian contingent – are only a small part of global group Applebaum has connected with already.

As the CEO of Golf Canada, he’s been thrilled to continue to drive the momentum of the organization forward – ‘momentum’ he said, is probably the one word to sum-up the last 12 months or so.

Applebaum, with his second Annual Meeting as CEO in the rearview – where Golf Canada announced its three-year strategic plan – was happy to mix business with pleasure this week in Ponte Vedra Beach.

Martin Slumbers, the chief executive of the R&A, Jay Monahan, the commissioner of the PGA Tour, Canadian golf hall of famer Mike Weir, and Mackenzie Tour-PGA Tour Canada president Jeff Monday are just some of crew Applebaum has talked with. He’s enjoyed sharing the good-news story behind this year’s RBC Canadian Open.

“The new date. The new purse. The extension of the RBC sponsorship. The recent news that we’ll have three direct qualifiers from the RBC Canadian Open into the British Open is going to be wonderful,” he said. “We have such a great snowball effect of what’s going on.”

The commissioner, Applebaum said, was instrumental with the new date and helping to bring three partners – RBC, Golf Canada, and the PGA Tour – together to make the upcoming RBC Canadian Open a special one.

He said although the PGA Tour is a big professional sports organization, it’s also a really intimate family.

“They’ve wrapped their arms around Canada,” he said.

With The Players becoming the signature event of the PGA Tour, it’s become a spectacle with the global golf community invited. There are things the organizing team will bring from The Players to the RBC Canadian Open this year.

“When you spend any time here, you realize it’s a little beach town outside Jacksonville, Florida, and it’s become a mecca for golf fans. Golfers, sports fans, people looking for fun things to do – like family entertainment – and they’ve brought food, music, a real spectacle in the middle of March which is really nice,” said Applebaum.

“We’ve learned a lot from what they’ve done. We’ve really got to build our own identity for the RBC Canadian Open and it’s going to be the start of summer when our new event is, which is really exciting.”

Not only is there exciting news around the RBC Canadian Open, but Canadian golf as a whole, said Applebaum.

There are eight Canadians with PGA Tour status this year – nine if you count Graham DeLaet, who is on a major medical exemption and 10 if you count Weir, as a past major champion – which is the most ever.

He also points to the success of Team RBC members Dustin Johnson (as world no.1) and new Team RBC member Webb Simpson (as defending champion at The Players) as something else that’s been a positive through late 2018 and early 2019.

“We want to keep that momentum going,” he said – with a smile, of course.