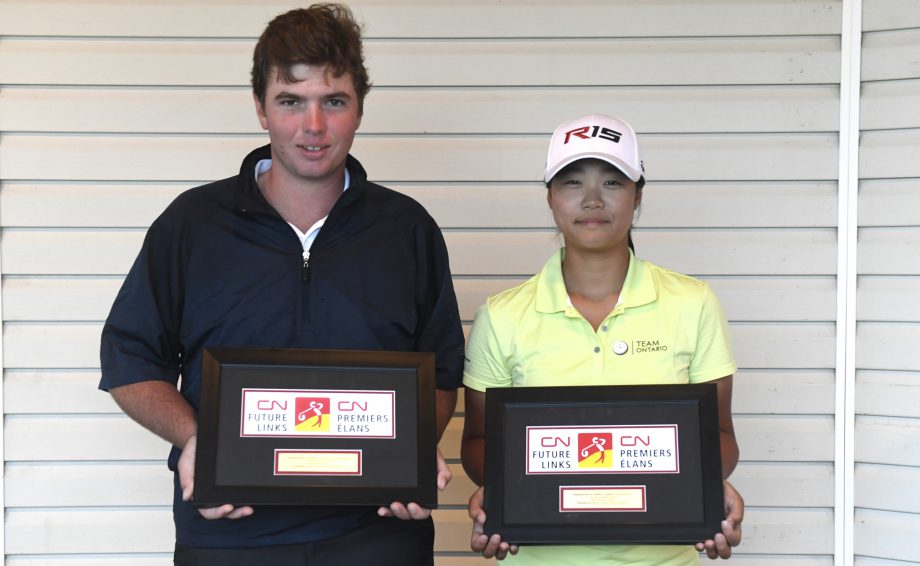 BEAUCEVILLE, Que. – A cloudy drizzle hung over Club de golf Beauceville, but the competitors played through the damp conditions as the 2016 CN Future Links Quebec Championship drew to a close. Monet Chun and Callum Davison held the opposition at bay and emerged victorious at Golf Canada’s third CN Future Links event of the season.

The Junior Girls’ lead teetered between Chun (Richmond Hill, Ont.) and Noémie Paré (Victoriaville, Que.) throughout the day, but the resilient Chun made par on her final eight holes to secure top spot. The first-time CN Future Links champion held the lead through all three rounds of play and closed the weekend at 5-over 221.

“My round wasn’t great today, but I’m glad I finished well on the back nine,” she said. “It’s my first CN win and I’m really happy about it because it’s one of the biggest tournaments I’ve won.”

The 15-year-old collected two birdies on the day to finish one-stroke ahead of Paré, who carded a 76.

When asked about her preparations for the Canadian Junior Girls Championship, Chun said today’s event was a good start. “This win is a definite confidence-booster, and it exposed me to all the good players that are in Quebec. It’s definitely going to help me prepare more for the Nationals.”

Céleste Dao of Notre-Dame-de-L’Île-Perrot, Que., remained among the Top-5 throughout the weekend, tallying a tournament total 8-over 224 to claim third place.

Competitors in the Top-6, including ties, in the Junior Girls division gained entry into the Canadian Junior Girls Championship at The Links at Penn Hills in Shubenacadie, N.S., August 2-5. Chun, Paré, and Dao will be joined by Isabella Portokalis (London, Ont.), Meghan McLean (Port Williams, N.S.), and Alyssa DiMarcantonio (Maple, Ont.).

Four birdies in a final-round 73 made the difference as Callum Davison registered a two-stroke win. The Duncan B.C., resident finished the competition at 3-under 210.

“As the round got going I made a couple good up-and-downs to save par, and then from there I started to play better and get more confident,” he said.

The 15-year-old says the key to his success was staying calm, despite the crowded leaderboard. “I had a little bit of pressure after nine holes, and then gave myself a little bit of a cushion. It feels good to finish well.”

Additional information regarding the 2016 CN Future Links Quebec Championship can be found here.