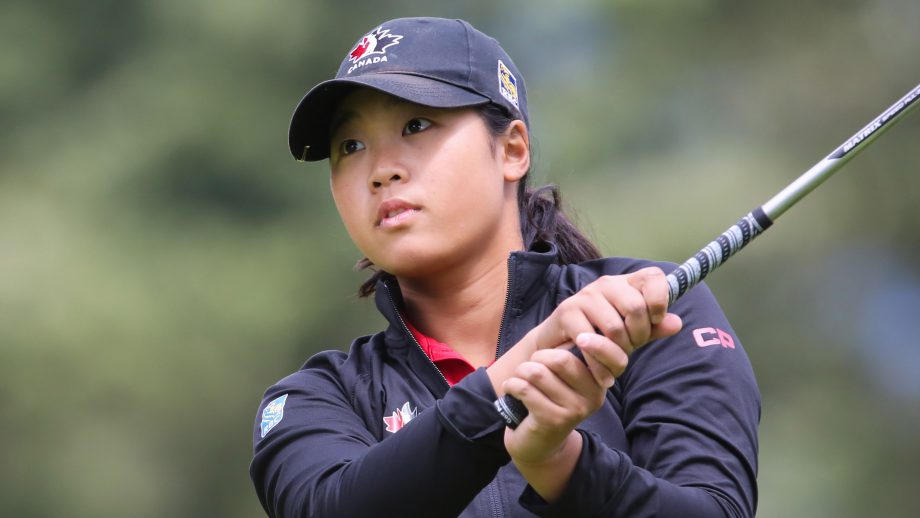 Having recorded some impressive results, Monet Chun is proving herself to be a promising and talented young golfer with a bright future ahead.

Among the highlights for the second-year member of the Team Canada’s Development Squad are three victories at Future Links, driven by Acura Championships: Quebec, Ontario and Pacific, winning this past May by a two-stroke margin.

Other highlights of her impressive 2017 season include a win at the Investors Group Junior Girl’s Spring Classic, a top-10 finish at the prestigious Porter Cup along with a 3rd and 4th place finish at the Junior Orange Bowl and Canada Summer Games, respectively.

Looking back on her humble beginnings, the Richmond Hill, Ont. native says she got started at the age of five with the encouragement of her mom, Elena.

“My mom looked for a sport with limited possibilities of injuries. I started taking lessons once a week and participated in my first tournament at the age of seven,” she recalled.

Growing up, Chun would dabble in other sports—but after committing herself to golf at the age of 10, she has not looked back.

“I played other sports like volleyball and basketball for fun, but never competitively,” she pointed out.

“I realized I wanted to play at a high level since I was 10. Playing at an international golf event made me want to continue to play at that level and I want to compete with the best players.”

After a number of runner up finishes, Chun’s first big victory came at the 2015 Ontario Junior Girls’ Match Play championship where she defeated Alyssa Getty 5 & 4 in the championship match. In 2016, Chun would win the Golf Quebec Junior Spring Open and finish in a tie for second at the Ontario Women’s Amateur.

Having spent some time working with Chun, 2007 Ontario Women’s Amateur champion, coach Rebecca Lee-Bentham sees a lot of potential in the young golfer.

“I see a lot of myself in Monet because I can see that she’s really disciplined and works really hard; and is really dedicated to getting better each day,” said Lee Bentham, a retired LPGA pro and current PGA of Canada Class “A” coach.

“She’s consistent off the tee and has a good long game and her short game is sound also,” added Lee-Bentham. “Overall, she’s very talented and has a promising future ahead.”

The 17-year-old golfer is quick to credit her mom and her dad, Peter, for their unconditional support over the years.

“I would not be able to play the sport without the support of my parents and their dedication in driving me to practices and taking me to tournaments. I think their commitment to my game has been a key factor to my improvement over the years,” said Chun.

She is also quick to credit her time on the women’s development squad for her progression as a player.

“The program has helped improve not only my techniques, but has helped me improve physical strength and my mental game,” she said.

Currently Chun is part of the first group of golfers who have relocated to Bear Mountain Resort in Victoria, B.C. as part of the revamped development squad program.

The change in program structure and commitment to a centralized training environment over four and a half months of the year are designed to better support emerging talents as part of Golf Canada’s next generation strategy.

“The training facility in Victoria is well equipped and suited for our practices. I think it is a great idea for the team to be centralized in Victoria,” said Chun.

“It will help to improve my game since I will be receiving better support, more time with the coaches, better weather and facilities, and programs that fit our needs including schooling.”

The Richmond Hill, Ont. native was chosen to represent Canada—for the second year in a row—at the World Junior Girls Championship this past September in Ottawa.

“The field has many strong players and I was able to meet new people from all over the world. Being able to take part in a team is a different experience to other competition which I think makes the World Junior Girls Championship a wonderful experience. Also, I was able to get to know my new teammates better. It was a fun tournament,” said Chun about the event which was held at the Marshes Golf Club.

Looking ahead, the talented and promising young golfer is clear on both her short and long-term goals.

“My goals over the next year are to play consistently during (and outside) of tournaments; and commit to a school in the States,” said Chun.

“And my goals over the next five years is to win a national title, play in the NCAA representing a college team, and play in an LPGA Tour event.”