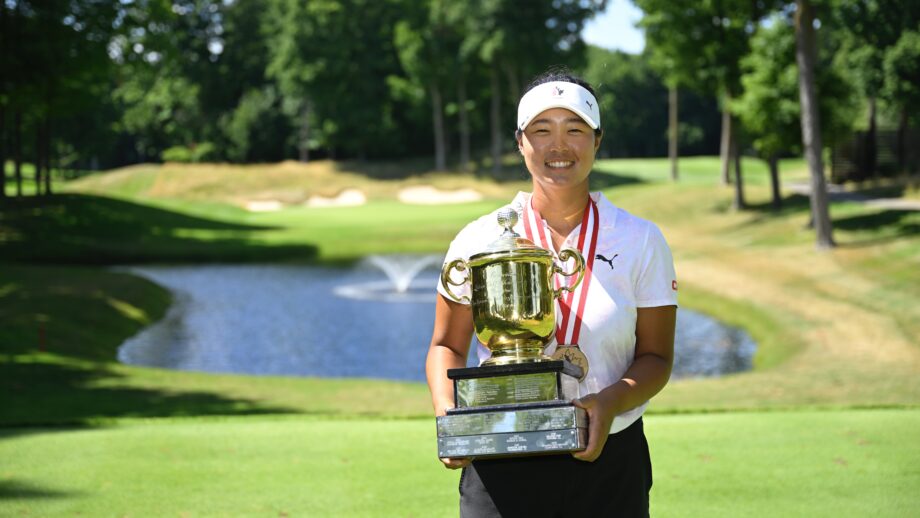 KITCHENER, Ont. – On a day where her idol, Brooke Henderson, made history overseas, Monet Chun added her own name to the record books by winning the 108th Canadian Women’s Amateur Championship, presented by BDO.

Chun, 21, fired an even-par 73 to win the national championship by two shots over Alissa Xu. With the win comes an exemption into the CP Women’s Open at Ottawa Hunt & Golf Club, August 22-28, as well as a spot in the U.S. Women’s Amateur Championship, August 8-14, at Chambers Bay.

“I was coming into this week just trying to put together a couple of good rounds, but I’m happy that it worked out,” said Chun. “Coming into the stretch was a little bit stressful just because it was getting pretty close there, but I didn’t really change too much in my game.”

“I don’t think I’ve ever had a crowd that big following me around. It’s pretty cool to get some local people just watching and, yeah, I had a lot of fun,” said the Michigan University product.

Along with the Duchess of Connaught Gold Cup, Chun will take home a cheque of $1,200. To align with the modernized Rules of Amateur Status, players at the Canadian Women’s Amateur Championship, competed for a purse of $8,000 CAD. Along with Chun, top-10 finishers and ties earned a piece of the prize money.

With Lauren Zaretsky’s win in 2021, the pair become the first Canadian duo to win back-to-back since Henderson and Augusta James did it in 2013 and 2014.

“Following in their footsteps is a big thing, just as a Canadian… I don’t know, it’s nice and a lot of fun,” Chun said, at a loss for words.

Team Canada Stollery Family Women’s Head Coach, Salimah Mussani, followed the final pairing and couldn’t be happier for not only Chun, but women’s golf in Canada.

Although she made it look easy this week, that wasn’t always the case for Chun who admits she struggled with her game a short time ago. With hard work and patience came a national championship and memories that will last a lifetime.

“It’s been a huge couple of years just grinding it out,” said Chun. “Coming out here today and having this win is huge for me,” said Chun. “It seems like my game is coming towards where it should be or going in the right direction, so I’m happy.”

Chun’s range session following her second round 78 was a turning point in the week for the champion, and though Mussani was there for pointers, she directed all the credit to the player for putting in the work.

“She knows what she needs to take care of, she knows her putting needs to be key here, we did a lot of work on that. She focused on it, she spent the time in the mornings and after her rounds and she took care of business,” said Mussani. “She just gets things done.”

Xu gave Chun a run for her money, firing a found-under par 69 to finish as the runner-up. The 16-year-old rolled in six birdies to post her second round under par for the tournament. In third was the Newport Beach, Calif. native, Katherine Muzi, and Team Canada National Junior Squad member Lauren Kim with a score of even-par over the 72-hole championship.

The 2023 Canadian Women’s Amateur Championship will be played at Ashburn Golf Club in Halifax, N.S. Dates are to be announced at a later time.