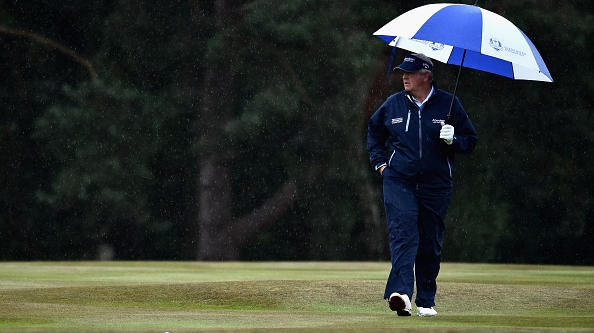 SUNNINGDALE, England – Torrential rain wiped out most play Friday at the Senior British Open with more than half the field still to start their second round.

Scotland’s Colin Montgomerie is one of eight players who is 5-under at the top of the leaderboard but five of them have yet to play a hole in the second round.

Two strokes behind overnight, Montgomerie birdied three of his first five holes to lead outright on 6 under. With increasing rain, he bogeyed No. 10, birdied the 11th and bogeyed the 12th to return to 5 under overall, and 2-under 45 for the 12 holes he played.

Among the leaders, China’s Lianwei Zhang and Bart Bryant of the United States had started their second rounds when play was suspended for the day at 3 p.m.

Zhang was 1 over for the round after 11. Bryant parred the two holes he played.

Ian Woosnam made a move up the leaderboard with an eagle at the first and birdies at Nos. 4 and 9 to be out in 31. The Welshman was 5 under overall at the turn, but in the worst of the weather he dropped strokes at the 10th and 12th and was 3 under when play stopped. Woosnam is tied for 12th, including Duffy Waldorf, who had four birdies and just two dropped shots in the 17 holes he played Friday.

“The plan will be to finish round two and start round three tomorrow, when the forecast isn’t too bad,” said David Williams, chairman of the European Senior Tour. “We’ll finish that off on Sunday morning … and finish (the tournament) when we’re meant to.”