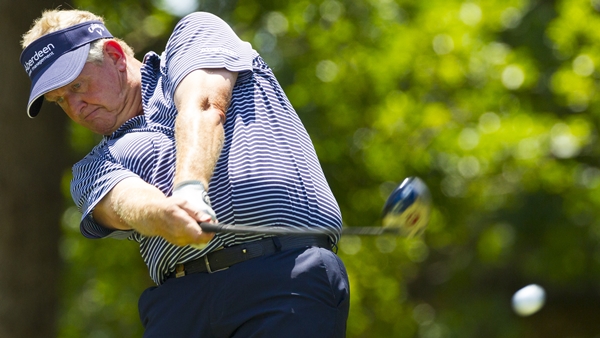 After 18 holes, Montgomerie may well have seized that position himself with a 6-under 65 to lead at the end of Thursday at Oak Tree National.

The Scotsman started on No. 10 and birdied Nos. 14, 15 and 16 on the way to a 33 on the back nine. He birdied six, seven and eight to finish strong in oppressive heat and humidity.

“That was the key to the round, the three birdies in a row on the front nine, my back nine,” Montgomerie said. “To birdie six, seven, eight was good. That got me to the position I am now.”

Marco Dawson was second after a 66, and Mark Brooks was third after shooting 68. Langer was one of five golfers tied for fourth with a 69.

Dawson, in his first Senior Open, started on the back nine and shot 2 under, then was steady on the front nine before scoring birdies on seven, eight and nine. The 50-year-old said it was one of the two best rounds he’s played in his six Champions Tour events. He was pleased with the performance, especially considering the course’s challenging reputation.

“It just seemed to happen, you know, birdie, birdie, birdie the last three holes, so I ended up 5 under,” he said. “I could have shot 2 under and still would have been a good round.”

Brooks birdied the 11th, 12th, 13th and 14th holes to go 4 under on his first five holes. He shot 3 under on the back nine and even on the front nine.

“I’ve been playing here since high school,” he said. “I’m comfortable here. My mother and father both are Oklahomans, so I got a lot of Oklahoma blood in me.”

Langer, who entered the Senior Open having already won three events this year, was in a five-way tie for fourth along with Vijay Singh, Kirk Triplett, Scott Dunlap and Gene Sauers.

“They say you don’t win a tournament on the first day,” Langer said. “You can certainly lose it with a bad round, so, you know, I’m somewhere in the top 10 or top 20 after today, which is a good spot to be. Still have three rounds to go.”

Mother Nature was a factor for various reasons.

Play was delayed for 77 minutes at the start due to the threat of lightning, and play was suspended because of darkness at 8:54 p.m. CDT, with three players still on the course.

Wilting 90-plus degree heat with humidity hit in the afternoon. Darrell Kestner completed 14 holes Thursday before withdrawing and being treated for a heat-related issue.

Peter Jacobsen, who withdrew from last year’s Senior Open in Omaha after nine holes because of dehydration, made it through the opening day in Edmond. He shot a 1-under 70, then held a sports drink as he answered questions.

“I learned a really good lesson,” he said. “My doctor told me, `Don’t ever get dehydrated because it’s very debilitating on your body.’ I walk around with water and Gatorade and lot of liquid, especially here when we know it’s going to be humid and hot.”

Heavy rains Wednesday softened the course, but the heat Thursday made it hard later in the day. Changing winds added another degree of difficulty to an already long, tough course.

“It is kind of difficult to judge the wind out here,” Montgomerie said. “You’re always going to get breeze out here in Oklahoma. That’s part of the test out here.”

Weather is expected to remain a factor through the rest of the tournament, with temperatures expected to soar. Montgomerie said it will amount to a physical examination.

“It’s going to be grueling over the next three days,” he said. “Concentration levels will be difficult to maintain for everybody out there, not just myself. I look forward to the challenge of trying to compete against the rest of the field, the golf course, which is superb, and also the weather conditions, which are very foreign to myself and most competitors, to be honest. We don’t usually play in 100 degrees. It’s going to be interesting over the next three days.”

The lone Canadian in the field is Rod Spittle, who opened with an up-and-down even-par 71 that included four birdies and four bogeys. He’s six shots back of the lead, tied for 18th.