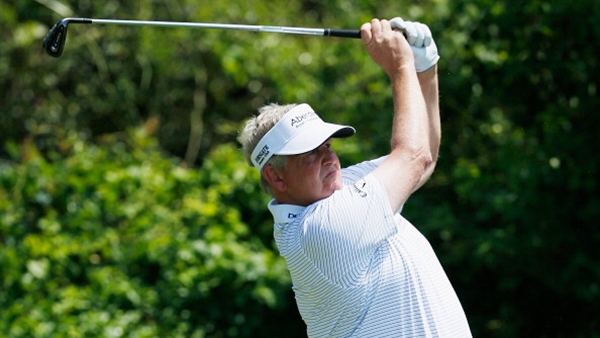 BENTON HARBOR, Mich. – Colin Montgomerie had a one-liner ready to go when asked his winless first year on the Champions Tour.

“I haven’t won yet and I would love to win, obviously, a senior event somewhere, whether it be in this decade or not,” Montgomerie said Wednesday at Harbor Shores on the eve of the Senior PGA Championship.

Montgomerie, who will be 51 on June 23, is in the marquee group Thursday with Ryder Cup Captain Tom Watson and Bernhard Langer, a two-time winner this year and the money champion five of the last six years.

Watson said Montgomerie’s ability to hit high fade shots fits the design of Harbor Shores, the Jack Nicklaus-designed resort layout that opened in 2010. England’s Roger Chapman won the 2012 Senior PGA at Harbor Shores and the course also will be the tournament site in 2016 and 2018.

“Monty’s starting to play well out here,” Watson said. “Jack likes to build his greens where cut shots are the iron shots of choice, so that will be an advantage for (Montgomerie).”

Montgomerie admitted iron play has always been his strength, and called the course unique.

“I look forward to trying to attack certain pins and not the others you have to be very careful with,” said Montgomerie, who has six top-10 finishes and a tie for 16th so far this year on the Champions Tour. “You have to be very careful here and use the head an awful lot of the time. I see what the designer was trying to do. There are pockets in the greens where you have to hit (the ball). What you must not do is miss those pockets.”

The Scot said he has enjoyed playing on the Champions Tour more than he was anticipating.

“The competition is very high, extremely high,” he said. “I wish it was lower, but it’s not. And it’s good that it is that good. That means that when you do well it’s actually meaningful.”

Perry’s last round at Harbor Shores was a Senior PGA record 9-under 62 in the final round of the 2012 Senior PGA. He couldn’t catch winner Roger Chapman, but he remembers his round and feels he knows the secret to the sometimes dramatic undulating greens.

“I had great control of the ball with my irons,” he said. “I drove it beautifully that day, and I was able to keep the ball in the right plateau to give myself realistic birdie putts on these greens.”

Perry, who splits time between the PGA Tour and the Champions Tour, covets a spot in the PGA Championship later this summer in his home state at Valhalla in Louisville. The winner Sunday earns an exemption.

“I’ve given 30 years of my life to the PGA Tour and it would be a great way to kind of end my chapter on the PGA Tour out there,” he said.

Fred Couples is skipping the tournament because of back troubles.