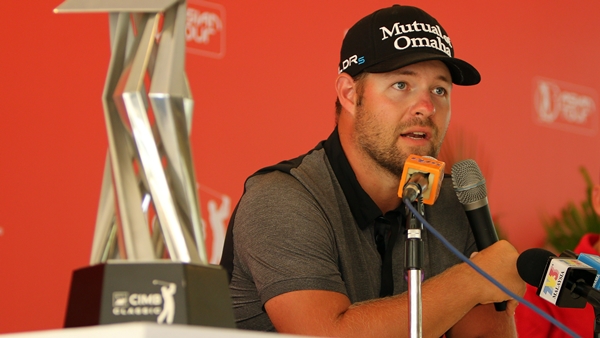 KUALA LUMPUR, Malaysia – Ryan Moore knows how to finish a tournament, and how to start a season.

For the second straight year, Moore won the CIMB Classic on Sunday, and for the third year running he won on the PGA Tour’s fall schedule to get a flying start to the season, having also won the Shriners’ Hospitals for Children Open in October 2012.

Moore shot a 5-under 67 for a three-stroke win, beating fellow American Gary Woodland for the second straight year. He finished on 17-under 271 at Kuala Lumpur Golf and Country Club to become the first player to defend a title on the PGA Tour since Tiger Woods at the Arnold Palmer Invitation in 2013.

Moore had eight birdies against three bogeys in the final round, and earned his fourth PGA Tour title with superb approach shots at the 14th and 17th holes for birdies, and some nerveless putting on the back nine.

“It was incredible to finish the way I did coming down those last few holes,” Moore said. “I like to tell myself all the time that `I am a closer. Let’s just do what we can, hit good shots and let’s close this thing’ and I was able to do that.”

What he wasn’t able to do yet is work out why he wins tournaments early in a new season and not after.

“I’ve been thinking about that for a while trying to figure out why,” Moore said. “Maybe it’s because the end is near. I see that I’m going to have six or seven weeks off pretty soon and it’s like `it’s the home stretch, just play some good golf and finish off the year’.

“I’ve got to figure that out and try to approach every tournament that way.”

Woodland, who lost to Moore in a playoff at this tournament 12 months earlier, threatened to reverse that result by firing six birdies without a bogey over the first 15 holes to move within a shot of Moore.

He had a birdie putt at 16 for a share of the lead that lipped out, and at 18 he had the chance for another birdie that would have upped the pressure on Moore, but missed it, and the close-range par putt.

“The par fives cost me all week,” Woodland said. “I played beautifully outside the par fives.”

Na birdied three of the first four holes to take a two-stroke lead and still led by a stroke after 12 before his round began to unravel.

A bogey on the 13th dropped him back into a share of the lead; at 14, a downhill eagle opportunity slid past the hole at pace and turned into a three-putt for par; and at 15 he missed a birdie putt, leaving him two shots behind.

With Moore taking a bogey at 16, Na looked like getting back a share of the lead with a birdie putt from two feet. Distracted by some cameras, he had to back off the putt, and missed it. After tapping in for par he waved his finger to the gallery in frustration.

Things went from bad to worse at 17 when he put his tee shot into the top of a palm tree. With the ball irretrievable, he took a penalty and returned to the tee, finishing with a double-bogey six that ended his challenge.

“It’s my fault hitting a bad putt and it’s hard to recover from that late in the day,” Na said. “I never got it together before I hit the next shot and you saw what happened.

“It’s disappointing when you know you had the lead and it’s yours, but Ryan did step it up in the end.”

Another palm tree proved Garcia’s undoing on the par-5 10th, also having to take a penalty and return to the tee and the double-bogey seven dropped him from two shots off the lead to four.

“After nine, I thought I had a chance because I finally got some things going after two or three lip-outs early in the round for birdie,” Garcia said. “But unfortunately that double bogey kind of stopped me.”

South Korea’s Bae Sang-moon (69) was tied for fifth with 21-year-old Australian Cameron Smith (68), who vaulted up from 13th to fourth on the Order of Merit in the Asian Tour, which co-sanctioned this event.

Canada’s Mike Weir finished at 7 under after a final round 68 to tie for 21st, his best finish in six months.