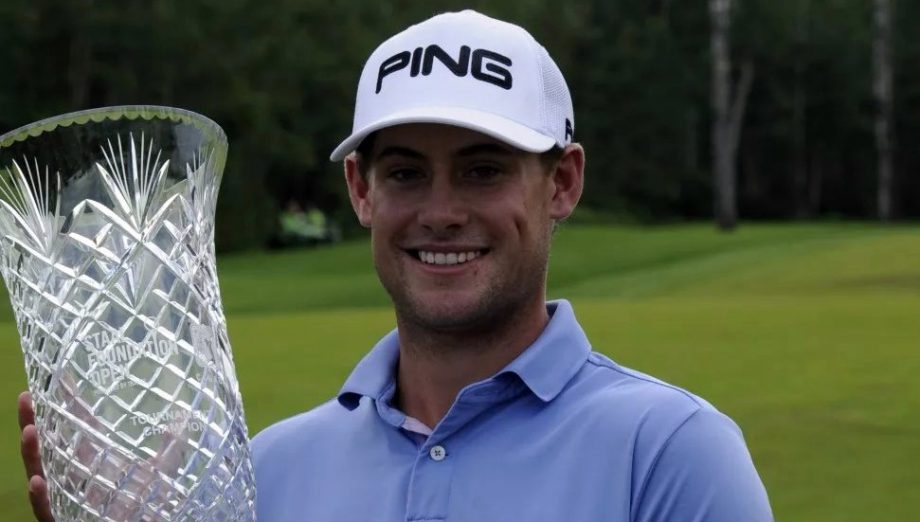 Thunder Bay, Ont. – Oklahoma’s Taylor Moore shot a final round 6-under 66 on Sunday at Whitewater Golf Club to win the Staal Foundation Open presented by Tbaytel for his first Mackenzie Tour – PGA TOUR Canada win. The win moves Moore to No. 2 on the Order of Merit, earning him an exemption into the RBC Canadian Open next week.

The 22-year old University of Arkansas graduate carded five birdies, an eagle and one bogey to win by three over Listowel, Ont.’s Corey Conners.

“It feels incredible,” said Moore, who birdied the 18th hole to secure the three shot victory. “I didn’t really want to think about it (RBC Canadian Open), but it’s a dream come true — it has been a life goal of mine to play in a PGA TOUR event. I’m excited about that and ready to get going.”

Starting the day with a one stroke lead over California’s Tain Lee, Moore started steadily but was quickly caught by Conners, who birdied his first three holes to tie Moore’s lead. Moore, a Mackenzie Tour rookie, responded strongly, however, with three birdies and an eagle from from holes three through seven to take control of the tournament, adding a birdie at the 10th to take a four shot lead with eight holes to go.

“Corey came out of the gates hot and birdied the first three so I knew I couldn’t just sit there and be complacent,” said Moore.

“Taylor had a great eagle on no. 7, made a great putt, and I walked out of there with a par so that was a bit of a swing,” said Conners, who was nonetheless pleased with his performance. “I played pretty well, got off to a really nice start. I’m happy with my game all around.”

For Moore, the win came with the added bonus of having his father, Rod, caddying for him for the first time as a professional.

“It’s something you’ll remember forever. It’s awesome, to have him on the bag is even better. He doesn’t get to do it very often,” said Moore, who recorded a runner-up finish earlier this year at the Bayview Place Island Savings Open presented by Times Colonist.

Conners, who currently ranks No. 3 on the PGA TOUR Latinoamérica Order of Merit, recorded his best career Mackenzie Tour finish, as did Church Point, Nova Scotia’s Austin Connelly, who shot a 5-under 67 to finish alone in third place.

MCCARTHY, MOORE, CORNELSON TEE IT UP ON THE PGA TOUR

Below are the top five players on the Order of Merit through six of 12 events, with the top five earning status on the Web.com Tour for 2017 (bold denotes Canadian).