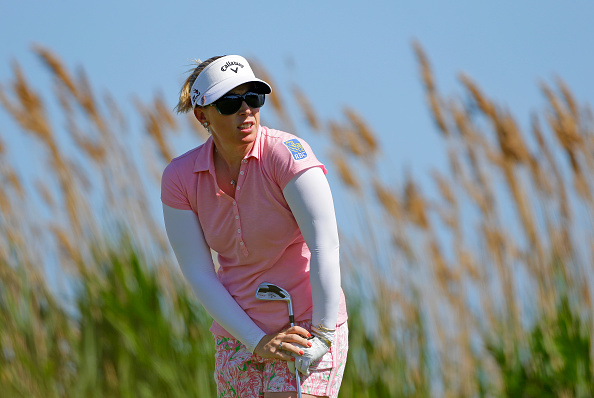 GALLOWAY TOWNSHIP, N.J. – Morgan Pressel said she knew Saturday that it was going to be a tough day in the second round of the ShopRite LPGA Classic. The wind was strong and steady, the greens were bumpy and she failed to convert some early birdie chances.

But Pressel showed some veteran patience throughout the day and effectively battled the elements well enough to shoot a 2-under 69 and maintain a one-stroke lead.

Pressel had three birdies and a bogey to reach 7-under 135 on Stockton Seaview’s Bay Course. The 27-year-old American won the last of her two LPGA Tour victories in 2008.

“I think my patience was kind of tested on the first few holes where I had a few good birdie opportunities and didn’t even sniff the hole,” Pressel said.

“Rock (caddie Barry Cesarz) said to me, `Keep giving yourself birdie opportunities.’ And I ended up making a few. When you’re missing four or five putts on the front nine from 10 feet for birdie, it can wear on you. You’ve just got to say, `Hey, I made a good stroke, the greens bounced this way.'”

Sweden’s Anna Nordqvist was second. She birdied the last three holes for a 69.

Gerina Piller, Kelly Shon, Pernilla Lindberg, Catriona Matthew and Christel Boeljon were tied for third at 4 under. Shon had a 68, and Piller, Lindberg, Matthew and Boeljon shot 70.

The start was delayed an hour by fog. After the fog lifted, the breeze that usually blows at the Bay Course confounded many players trying to pull the right clubs. In addition, players noted that bumpy greens affected their putting.

Pressel didn’t allow the conditions to bother her. She did card a pair of birdies on her front nine – a 2-putt at the par-5 third hole and on the difficult par-4 sixth.

Her only bogey of the day came at the par-4 13th hole, where she lost her drive into the trees on the right and had to punch out from high grass into the fairway. After her third shot rolled over the green, she got up and down from 6 feet for a good bogey.

“I think that once that went in, my patience was fine,” Pressel said. “I’m like, `OK, I got out of there with a bogey and didn’t make double, and I know that I’ve just got to keep plugging along with pars coming in, and ended up making a good birdie on 16.”

Pressel came close to winning last month, but lost a playoff to top-ranked Lydia Ko in the Swinging Skirts in California.

Nordqvist, a four-time tour winner who had four straight top-10 finishes earlier this year, rallied from bogeys at Nos. 11 and 12.

“I tried to give myself chances for birdies or play for pars on some holes,” Nordqvist said. “But knowing it’s a three-day event, you’re really going to have to try to shoot low scores every day. I tried to stay patient, and I think it paid off with three birdies there at the end.”

Defending champion Stacy Lewis and 17-year-old Canadian sensation Brooke Henderson struggled, but made the 36-hole cut right on the number at 3-over 145. Lewis had a 73, and Henderson, who had eight birdies in her opening round, went without a birdie Saturday in her round of 77.

Canada’s Alena Sharp also made the 36-hole cut. The Hamilton, Ont. native carded a 76 to sit tied for 35th at 1-over.

Michelle Wie, who withdrew from the Kingsmill Championship for what was diagnosed as bursitis in her left hip, missed the cut with a 72 and 4-over 146 total. She said her hip was sore and that she was considering withdrawing from the Manulife Classic next week in Cambridge, Ontario.