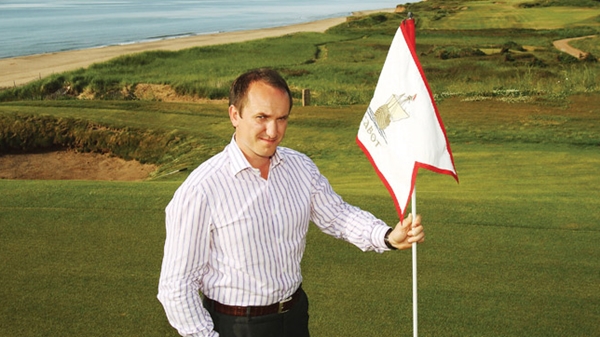 All year Golf Canada magazine has been asking Canadians what they would do to make the game more fun. Over and over again we hear one stunningly simple solution. It costs little to nothing for courses to implement and allows every golfer – male, female, old and young – to have more fun. The answer? Put the ego aside and play from a distance where you can achieve success on the course. Journalist Robert Thompson takes a closer look at the tee it forward movement below…

Arthur Little and his wife Jan Leeming own a course called Province Lake in Maine and run the Little Family Foundation. The pair felt golf courses were too long for not just high handicaps, but practically every golfer who isn’t among the best players in the world. Initially Little and Leeming wrote to Mike Keiser, the owner of the famed Bandon Dunes resort in Oregon, complaining that the forward tees on Bandon’s courses were too long.

“Then play where you’d like,” Keiser told me he replied while we wandered together around his latest venture, Cabot Links in Nova Scotia.

Keiser’s answer wasn’t what Leeming and Little hoped for. They wanted specific tees and they had research to back up their ideas. The notion that a woman should play at tees that are 5,300 yards, as is common on many courses, is simply wrong, the pair’s research showed. They found many female players should be playing courses from 4,200 yards, while male golfers should be at 6,300. Together with Keiser, they created “Royal Blue” tees that lie significantly ahead of what were previously considered the forward tees.

“We have people who play the Royal Blue tees and tell us it is the most fun they’ve had playing golf,” says Ben Cowan-Dewar, the co-owner of Cabot Links, where the Royal Blue tees play 3,700 yards. “We want the people playing them to feel like real golfers, and those tees get a lot of use from women and junior golfers.”

Cowan-Dewar isn’t alone in trying to get more golfers to move up a few decks. The notion has taken hold in the last year under the “tee it forward” initiative, a concept that suggests most golfers – male and female alike – are simply playing from the wrong decks. There’s nothing new about the idea. Golf Canada, the PGA of Canada, and numerous other organizations have promoted the idea of moving up a deck and saving time while having more fun.

The concept isn’t far removed from Little’s idea. The suggestion is that golfers should play certain tees based on the distance they hit with their driver. For example, if a golfer can hit the ball 275 yards, he or she is able to deal with a course between 6,700 and 6,900 yards long, while someone who strikes the ball 150 yards should consider playing a course from between 4,400 and 4,600 yards. “Courses, as traditionally and currently designed, are much too long, too difficult and take too long to play,” Little wrote  in one discussion on the subject. “Golf course owners and designers are fixated on lengthening courses to “fit” the very best players and get on “best courses” lists. As a result, they are not providing an enjoyable experience for average, beginning and aging golfers.”

Gary Bernard, chief executive of the PGA of Canada, is a big proponent of the notion of moving forward, an idea he’s become increasingly aware of. Now 57, Bernard says he’s regularly goaded into playing tees that are simply too long for him to enjoy. And if you can’t have fun, what’s the point?

“I want to play from tees where if I hit a reasonable drive I’ll have a reasonable approach to the green and a shot at birdie,” says Bernard. “At 6,500 yards I’m having fun, having the occasional shot at birdie. I sometimes get asked to play farther back with [younger PGA members], but I can’t hit it as far as they can. My ego isn’t tied up in it,” he continues.

That’s the key, says Bernard. The notion that somehow a golfer is being cheated if he or she doesn’t tip it up from where John Daly would play is a notion that is still too common. And Bernard says there’s no easy way for golf course owners to convince people that they should move up a deck or two.

“It is hard,” he admits. “You simply can’t tell someone where to play. That’s the last thing a guy wants to hear after he’s paid for his round.”

However, there are places that do dictate the length of course golfers can play. In the United Kingdom it is common for courses to have tees for visitors that are decidedly shorter than for those golfers more familiar with the course. In the UK shorter “relief” courses are also common, with yardages often much shorter than their tougher neighbor courses. For example, the Buddon Links, sister course to the nasty Carnoustie in Scotland, host of many British Opens, tips out at 5,300 yards. That’s almost 2,000 yards less than the main course at the facility.

“How do we get people to play alternative courses, like short courses or par three courses?” asks Bernard. “It isn’t easy.”

There are options out there for those golfers who don’t feel the need to be tested by 7000 yard monsters. Turnberry Golf Club in Brampton, Ont., for example, offers the challenge and intrigue of a longer course, but maxes out at 3,400 yards and can be played in less than three hours. But even at Turnberry, where several par threes have forced carries, playing the appropriate tees is important to a player’s enjoyment.

He’s right – which is another reason for golfers to try to play the appropriate tees.

One course that has tried to capitalize on the tee it forward concept is Granite Golf Club, in Uxbridge, Ont. Three years ago, Granite, a private club, instituted “family tees,” that were aimed at engaging more junior golfers. The tees are split by age and ability and range from 1,100 yards for nine holes to 2,500 for junior golfers who are age 11 or older.

“For us, it was a way of showcasing the club as a family facility that really engages the junior golfer,” says Walter Cheung, Granite’s general manager. “The goal was to change the way people think about where they play from. You’ll see families out playing the course together now.”

Since then Granite has made other adjustments to its course to make it friendlier for its membership. “The message is that it is okay to play from tees that suit your game, which is difficult enough to start with,” says Cheung.

At Cabot Links, Cowan-Dewar thinks the tee it forward concept is catching hold. Though his course is only 7,000 yards from the tips, it can be exceedingly difficult when the wind blows off the sea. Cowan-Dewar says a golfer’s goal should be to enjoy themselves, as opposed to struggling around a course that is too long in some sort of masochistic endeavor.

“Golf isn’t about losing six balls and punishing yourself throughout your round,” he says. “Why would anyone want to do that when they can move up and have fun?”

This article was originally published in Golf Canada magazine.