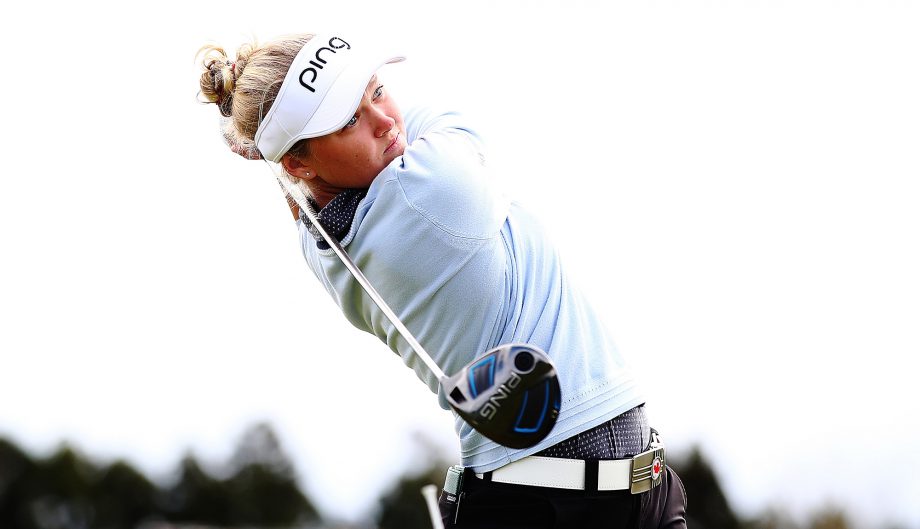 AUCKLAND, New Zealand – Spain’s Belen Mozo shot an 8-under 64, including a hole in one on the par-3 13th, to take a five-stroke lead after two rounds of the New Zealand Women’s Open on Friday.

Mozo finished strongly with a birdie on the 18th after a double-bogey on the 17th after hitting her tee shot into the water.

She had a 14-under total of 130 on the newly-established Windross Farm course.

Three golfers shared second place – Emily Tubert of the United States, who shot 65 Friday, Madelene Sagstrom of Sweden (67) and Brooke Henderson of Smiths Falls, Ont., the co-leader after the first round who had a 70 Friday.

The four other Canadians in the tournament include Alena Sharp of Hamilton, who fired a 73 to sit tied for 69th to just make the cut.

But Maude Aimee-Leblanc of Sherbrooke, Que., and Lorie Kane of Charlottetown each shot rounds of 76 and missed the cut, as did Calgary’s Jennifer Ha, who carded a 74.

Mozo used a seven iron on the 164-meter 13th. The ball pitched on the apron of the green and rolled straight into the hole.

Mozo, who hasn’t won an LPGA event since joining the tour in 2011, kissed the billboard depicting the luxury car she would have won if she had aced the hole on Saturday or Sunday.

“It is karma,” Mozo joked. “The last hole-in-one I found out someone had got one just before me so I missed the prize. This one the car is for the weekend. It is my fifth hole-in-one in competition.”

Mozo started the day in a share of third place after a first-round 66 and took the lead Friday with six birdies in her first nine holes.

“When you score like this, everything seems so easy,” she said. “I got perfect weather but you still have to perform well. I struck the ball really well and overall I was in a very calm state of mind.”

The 25-year-old Tubert, a native of Burbank, California, was a three-time all-American at the University of Arkansas and was the U.S. Women’s Amateur Public Links champion in 2010.

She considered quitting top-level golf while still at college, before joining the LPGA Tour this year.

With a new coach and caddie the 487th-ranked Tubert, with earnings of $23,654 this season, has begun to find her form. Her round Friday was bogey-free and featured a 40-foot birdie putt on the 13th.

“Things got off to a slow start but I stayed patient after I didn’t make any birdies early,” Tubert said. “I made some good putts and just tried to enjoy cold, misty New Zealand. It’s refreshing because it’s been a long time since I played good golf. ”