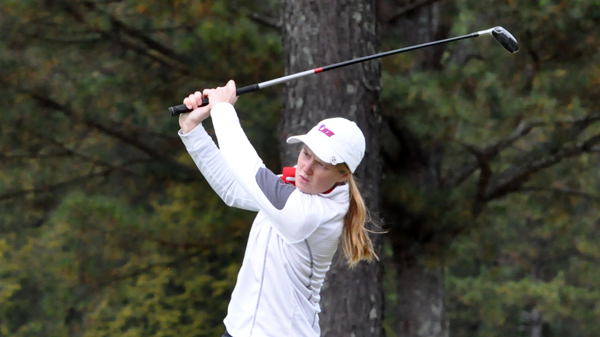 Beginning her 2013-14 season on a high note, Little won the Smokey Mountain Invitational by two strokes in September after firing rounds of 69-73-(142). After her first tournament win, Little used that momentum to add four more top five finishes; including second overall at the NCCAA National Championship. These individual successes rolled in, all while she helped the Lady Flames achieve three tournament wins and three second place finishes.

“Winning the Smokey Mou
Outside of her tournament win, a second place individual finish at the NCCAA National Championship in November was also an impressive highlight for Little. Her win there was made even more special when the Lady Flames won their first national title, and teammate Courtney Shelton took medalist honours.ntain was really exciting and exactly what my golf game needed,” explained Little.  “After getting my first win my mind set going into tournaments changed, I now feel I have a chance to win events, whereas before I just wanted to shoot a score that could help my team.”

“National Championship was a total team effort,” Little added “I was also really happy to see Courtney get that win, knowing how much time she put into her game. Finishing runner up to a teammate while winning the team portion in both men’s and women’s events made it even better”.

Little has finished inside the top 10 in all 10 events she played in this season, which she attributes to a combination of hard work in the off season, increased focus on her mental game and her coach, John Maupin.

Maupin had nothing but praise for the sophomore talent.

“Bernadette has helped our team this year in numerous ways, not the least of which is her stellar play,” explained Maupin. “Bernadette provides great leadership to our team through her dedication and work ethic. She also has a knack for teaching, and has been able to effectively share information with her younger teammates”.

“It’s something I discuss often with Bernadette, we would love to add another player from the province,” he added.

Despite her collegiate season being done, don’t expect Little to have much down time when she gets home. Little has her eyes set on the provincial amateur, nationals and a tournament in Florida this August in order to prepare for next season.

As for expectations heading into 2014-2015, Little said she wants to continue more of the same from this season. “I just want to keep improving my game, and put myself and our team in position to win some tournaments.”

Maupin sees Little’s stock continuing to rise. “She has a true talent, but even more importantly she has the desire and passion necessary to be the best. Knowing Bernadette, she won’t stop until she is the best player in Division II”.

Off the course, Little studies business management at Lee and plans on becoming involved with the coaching aspect once she graduates.

“After graduating I plan on becoming a golf coach and hopefully have the chance to work my way to the college level,” said Little.

Given her work ethic and pedigree as a player, Little’s future pursuit of a coaching role will no doubt be successful as well.

Kody Blois is a former goaltender with the Amherst Ramblers, now attending Saint Mary’s University, and is the Tournament and Communications Coordinator for the Nova Scotia Golf Association. You can follow him on twitter @kodyblois or follow his blog www.kodyblois@blogspot.ca.