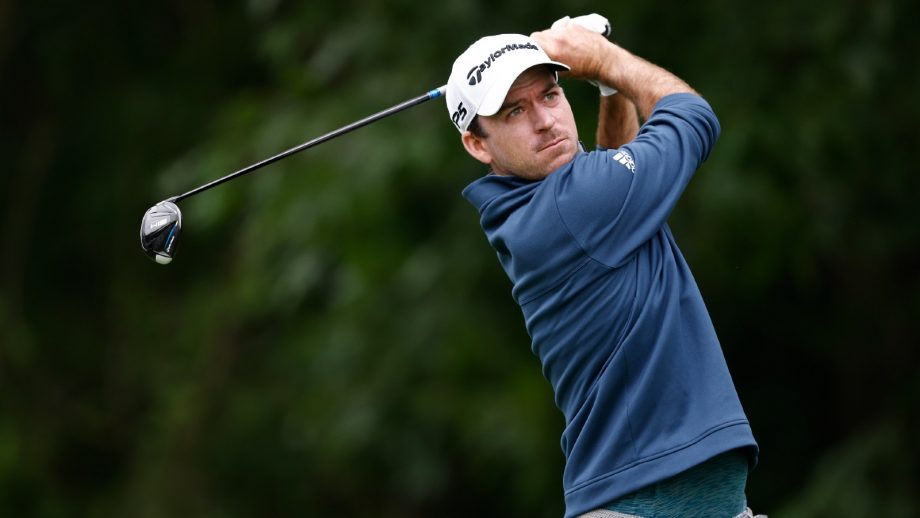 SILVIS, Ill. (AP) – Sebastian Munoz never knows when the switch will come on and the putts start to fall, but he recognized it happening Thursday in the John Deere Classic.

Munoz was motoring along when he closed with five straight birdies at the TPC Deere Run for an 8-under 63, turning a solid day into a share of the lead with Chesson Hadley.

“I just go blank, to be honest,” Munoz said. “It’s funny because when I make a lot of birdies, I usually play a little more safe and pick my spots. I have like 10-, 12-footers and they start to drop. That’s what I did today. And that’s where we’re at.”

Hadley was on the other side of the course, finishing on the front nine. It wasn’t nearly as spectacular, but he played bogey-free and had back-to-back birdies on three occasions. He was helped by making three of his birdies from 25 feet.

Hank Lebioda, who finished one shot out of the playoff last week in the Rocket Mortgage Classic, was poised to join them. He was 7 under through 12 holes and tied the lead with a tee shot on the 213-yard seventh hole that stopped 20 inches from the cup.

But he missed the fairway to the right on the par-4 ninth, chose to pitch back to the fairway and hit a wedge to 6 feet below the cup. He missed the par putt and had to settle for a 64. Chez Reavie and Camilo Villegas, who played in the morning, also were at 64.

Nick Taylor of Abbotsford, B.C., was the top Canadian after opening with a 4-under 67. David Hearn of Brantford, Ont., and Roger Sloan of Merritt, B.C., fired 1-under 70s, while Michael Gligic Burlington, Ont., was even par.

Scoring was so good in immaculate conditions that nearly half the field broke 70.

Ryder Cup captain Steve Stricker, who chose to play in the 50th anniversary of the John Deere Classic instead of defending his title in the U.S. Senior Open, got off to a sluggish start until he rallied with a few birdies on the front nine for a 70.

That will leave the three-time John Deere champion some work to do Friday afternoon to make the cut. But at least Stricker gets a little more sleep for that 54-year-old body.

“I’m not used to getting up at 5 in the morning anymore to play,” Stricker said. “And I kind of played like I was still asleep for a while. Righted the ship a little bit. A little disappointed that I didn’t capitalize on a few more of those coming in.”

The leading player from among the top five at the end of the week earns a trip to the British Open if he’s not already exempt. Munoz is in the field next week at Royal St. George’s. Hadley is not, though with so many low scores, it will take two more days to sort that out.

Cam Davis, a playoff winner in Detroit last week, had to turn down his spot in the British Open. Kevin Na decided to withdraw because of travel requirements in place for family members, and next on the reserve list was Davis.

One problem. The Australian can’t travel overseas. He got married last September, lives with his American-born wife in Seattle and decided to start the process of getting a green card for ease of travel overseas and going home to Australia.

He’s at the stage now where he can’t go overseas until he gets a temporary card. He knew that even before winning the Rocket Mortgage Classic. And he will get by.

The emotions of winning for the first time can take a toll. Davis wasn’t sure if he would continue his good form or run out of gas. Thursday was a little of both. He holed an 8-foot eagle putt on the par-5 second and reached 6 under through 11 holes, only to play 2 over the rest of the way for a respectable 67.

“I’m looking forward to seeing my family and celebrating back in Seattle next week and recharging a little bit because this week is already a bit of a grind to get through,” Davis said. “I’m pretty tired. It’ll be nice to relax.”