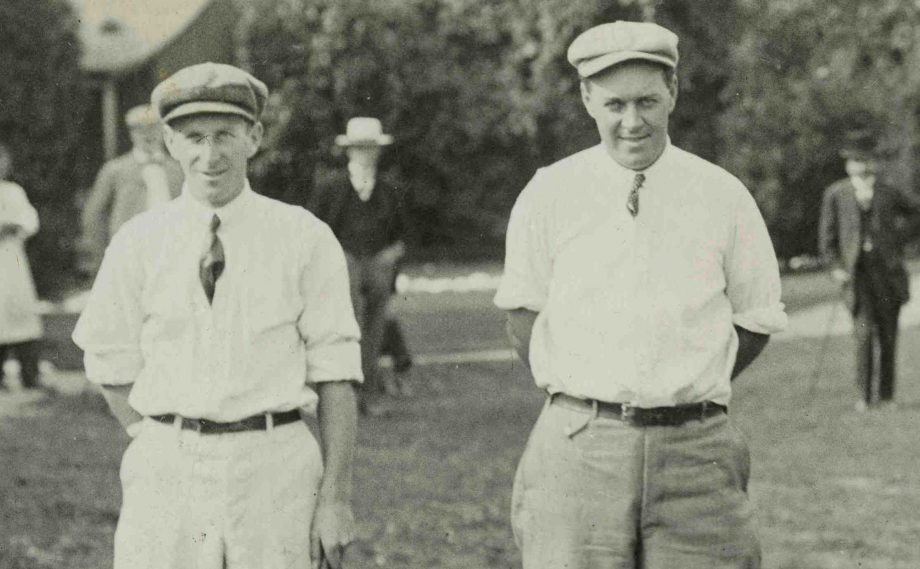 My grandparents lived in a duplex on a quiet street in Montreal, which I loved to visit any time the opportunity presented itself. In the hallway were photos of my grandfather, Albert, who was a professional golfer but never talked about his career in the game.

Not until I excused myself to head to their musty, unfinished basement did his involvement with golf become obvious. Along one of the walls, perched upright on a long narrow shelf were wooden golf clubs of every type and style you could imagine. One of the clubs looked like it was fashioned from a tree branch. Hanging beside his clubs, in a large wooden display case, were his antique golf balls and dozens of tees made of wood, paper and metal. In another room were his putty clay models of golf greens and what Granny called his “maps,” some rolled up on his desk, others hanging from the walls.

Amidst the hardware of trophies, metals and golf keepsakes that stuffed the china cabinet upstairs were four brimming scrapbooks of photos and clippings documenting a lifetime in golf. Not until decades later did a scrapbook of his brother, Charlie — revealed by a granddaughter who allowed the Canadian Golf Hall of Fame & Museum to scan it — confirm a stellar and pioneering career in professional golf for the brothers Murray.

Their father, Charles Joseph Murray, a carvers mason, had led them to Canada from England in 1888. In tow with he and his wife were three children: five-year-old Charles, eight-month-old Albert and a daughter in between, Frances. The patriarch wasted no time putting his skills to work, building a large family home replete with Corinthian columns while also taking mason jobs in the city. But finances were tight.

A few years later teenage son Charlie set out looking for part-time work. A tall, solidly framed youngster, he had heard about being a caddie at a nearby golf club where he could be outdoors, make a bit of money and learn a new sport on the side. Younger brother Albert, who respected Charlie a great deal and was never far from big brother’s footsteps, tagged along. He was nine.

In time, Albert picked up the rudiments of the game and in 1899 won his first caddies tournament; his prize was a plum pudding with a $5 gold piece inserted in the cake. He successfully defended his title the following year.

Competing for young Albert’s interest was the private racetrack behind their house owned by Joseph Seagram, founder of the distillery of the same name. Hanging around the stalls, Albert’s love of horses took root. With the permission of Mr. Seagram but not his father, along with Charlie’s promise not to say anything, Albert would get up at five in the morning to exercise and train the horses.

“In time, I gained confidence and would exercise any horse in the field,” Albert wrote in his diary. “The horses knew I liked them so it became easy to handle them.”

Almost immediately he had the desire to become a jockey, until his father found out.

“It was my first ambition and I liked it even more than golf,” he told a journalist years later.

The Murray brothers applied their skills and expertise together, first at the Toronto Hunt Club with Charlie as head professional and Albert as designated teaching professional; then at Westmount Golf Club in Montreal; and next at Royal Montreal Golf Club.

In 1906, Albert left Montreal for the (Royal) Quebec Golf Club at the Plains of Abraham, specifically Cove Fields in Quebec City. Just 18, Albert was hired to revamp the course and be its head professional. His tenure lasted a year when he returned to Montreal but members of the Quebec club had not forgotten him and in 1915 commissioned Albert to lay out their new 18-hole course at Montmorency Falls.

This was a couple years after the inaugural Canadian Open at Royal Montreal. There were just 10 pros, along with some amateurs, competing for the win in 1904 but 16-year-old Albert came in 12th and Charlie finished fourth. Albert (1908 and ’13) and Charles (1906 and ’11) each won the event twice.

As the years passed, Charlie cemented his reputation with members of Royal Montreal and the larger golfing public with his competitive prowess. By the 1920s he was often scoring in the 60s, quite unusual in the dead ball era and poorly groomed courses. His charismatic, dependable and terse personality won the deep affection of his members. A decade later, Charlie was bestowed an honorary lifetime membership at Royal Montreal in recognition of his 25 years of service.

In addition to capturing the inaugural PGA Championship of Canada and two Open championships, Charlie took the Quebec Open crown nine times. Albert’s second victory in the Quebec Open in 1930 by a record score remained unbroken for almost 50 years.

In the meantime, Albert was looking for a classy venue to launch Canada’s first indoor golf school so he leased the basement of Montreal’s Ritz Carlton Hotel in 1916. He had already invented several golf aids to go along with his lessons and he would operate his winter golf schools in various locations around Montreal for the next 25 years.

Albert’s interest in golf course architecture developed early on and by 1915 the younger Murray had already laid out 10 courses, some with Charlie, including the Kanawaki and Whitlock golf clubs. He would go on to design or remodel more than 60 courses, spanning a professional career of the same length.

With the outbreak of the First World War, patriotic golf matches for the Red Cross Relief Fund were established. This was the first time spectators paid to watch professionals play golf in North America. The Murray brothers, teamed up against the best pros of the day, were undefeated in their matches. Undeterred, in 1918, the Toronto Mail and Empire reported that multiple Canadian Amateur champion, George Lyon and professional Percy Barrett had challenged the Murray brothers for a match at Weston Golf & Country Club in Toronto, “with a side bet of $500.00 or $1000.00.”

The pro game was becoming lucrative, and in May of 1922, the Vancouver Sun reported that Charles and Albert Murray were the highest paid professional golfers in Canada. Charles had just turned down an offer from E.B. Mclean, publisher of the Washington Post, to be his personal coach and head pro at a private course he was building in Florida. In turning down the offer, Charlie was firm in his loyalty to the members of Royal Montreal where he had been head professional since 1905.

Instead Charlie became the first head professional of the newly designed Donald Ross course, Gulf Stream, in Delray Beach, Fla., beating out a number of outstanding U.S. professionals for the coveted position at this uber-exclusive club.

A devoted father to his three sons, Charlie’s routine for nine years was to head with his family to Florida in late fall to take up residence for the high season at the Gulf Stream club, returning in time to open the season at Royal Montreal. It was at Gulf Stream that Charlie established a North American reputation, breaking course records in matches at area clubs and hosting the golfing stars of the day.

Meanwhile, younger brother Albert was head pro at the Country Club of Montreal where he had designed their first course in 1910. Two years earlier Albert had captured his first Canadian Open at 20, establishing a record as the youngest winner that still stands 109 year later. Charlie maintains the most top 10 finishes in the Open, two better than Jack Nicklaus.

Murrays Reigned Supreme In Early Era read the headline in the Montreal Star in 1967 when they interviewed Albert. The “Yellow Course,” the first municipal course in Quebec designed by the brothers was the first time a public course was chosen to host an Open championship in North America. Now in his 70s, Albert shook his head at the modern stars of Nicklaus, Palmer and Player, saying the game had completely changed since their days of golfing, then paused and with a wink said “but the hole is still the same size.”

Ian Murray, a grandson of Albert, is currently writing a book on the Murray Brothers in Golf’s ‘Golden Age.’