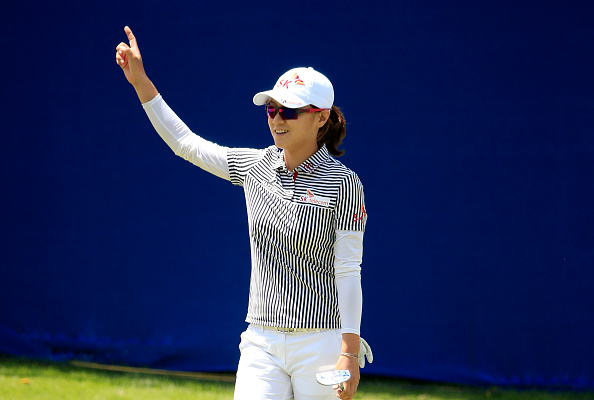 ROGERS, Ark. – Na Yeon Choi felt as if she had nothing to lose starring down her second shot on the par-5 18th hole at Pinnacle Country Club.

The eight-time LPGA Tour winner certainly played without a sense of fear throughout her second round at the NW Arkansas Championship on Saturday, matching her career best with an 8-under 63 to surge to the top of the leaderboard.

Choi reached 13 under overall after sinking a 45-foot eagle putt on the 525-yard final hole, a shot she set up with a fearless 3-wood approach shot to the elevated green.

“I got the 3-wood out first, then changed it to a pitching wedge and then back to a 3-wood because there is a small gap to the right side of the green,” Choi said. “… I mean, I couldn’t hit a 3-wood if today is Sunday, but today’s Saturday, and I feel good about my swing so I just hit it.”

Choi had reason to feel comfortable at Pinnacle, where she’s never shot above par in 23 career rounds and has finished in the top 10 in each of the last four years.

The South Korean will enter Sunday’s final round with a two-shot lead over Mi Jung Hur and Anna Nordqvist and in search of her ninth career LPGA title – her first since opening the year with a victory at the Coates Golf Championship.

“This course seems like it suits me, so I feel confidence,” Choi said.

In addition to Hur and Nordqvist at 11 under, several players enter the final round within striking distance – none more notable than defending champion and local favorite Stacy Lewis at 9 under overall.

The former Arkansas standout was also four shots off the lead entering the final round last year when she sank a seven-foot birdie putt on the final hole to earn her 11th career victory.

Lewis hasn’t won since, but she sank a 25-foot birdie putt on No. 17 on Saturday, and she followed that by capping her round with another birdie on the par-5 18th – much to the delight of the partisan gallery following her every shot at Pinnacle Country Club.

She finished with a second-round 65, doing so after an early round double bogey.

“I just stayed patient and finally hit some good shots and rolled the rock in there at the end,” Lewis said. “Those two putts on 17 and 18 were huge going into tomorrow, but it also gave the fans something to cheer about, too.”

While Lewis will enjoy the biggest spotlight on Sunday, she’ll have to catch Choi.

One South Korean who won’t be around for the final round is top-ranked Inbee Park, who missed her first cut in more than a year. Park shot a 1-over 72 to finish 1 under overall, the same score as Michelle Wie, who also missed the cut.

Hur opened the day by finishing her first round with a 63 to take the lead, and she followed with a second-round 68 to reach 11 under.

Nordqvist, who won the ShopRite LPGA Classic last month, also reached 11 under with a birdie on her final hole of the second round. She followed an opening 65 with a 66 on Saturday.

Canada’s Rebecca Lee-Bentham carded an even-par 71 to make Sunday’s final round of the 54-hole tournament.

Alena Sharp missed the cut by two-strokes despite a second round of one-under 70. Sue Kim posted a 68 on the day and Jennifer Kirby shot 72, both missed the two-under cut.