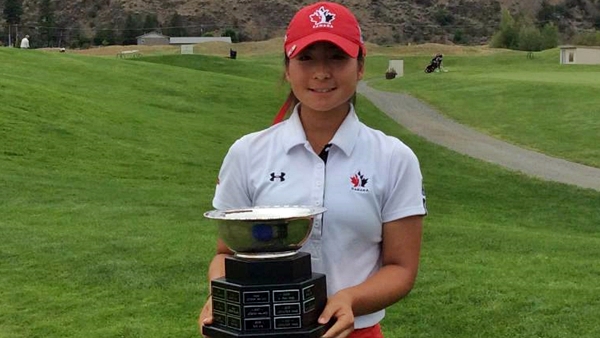 RICHMOND, British Columbia – Naomi Ko won the 2014 British Columbia Golf Junior Girls’ Championship title at The Dunes at Kamloops on Friday with a 6-under par 286 after four days of competitive play.

The Team Canada member shot even par on the par 73, 5886-yard course on the final day of the championship on her way to winning the title.

“I felt pretty good going into the round, I started off with a bogey so I knew I had to make a couple birdies to get where I needed to,” said Ko. “Plus Kathy and Alix are really good players so I knew I couldn’t get behind, I knew I needed to make birdies.”

Ko, 16, made four birdies on Friday to counterbalance her four bogeys it would be enough to keep her in first. After shooting a 69 on the first day of competition she co-led the championship with Alix Kong and Hannah Lee, but slipped into a tie for fourth halfway through the competition.

“I knew it was a four-day tournament so I knew I had 36 holes to recover, which I did yesterday when I shot 3-under,” added Ko. “I didn’t let myself get down, I just tried to stay as positive as I could on the course and it worked.”

Kathy Lim, of Langley, finished two strokes back of Ko as the BC Junior Girls’ runner-up with a 4-under 288 after playing incredibly consistently throughout the week with scores of 71-71-71-75. The 16-year-old was never out of contention for the title and was even tied for first after the second round.

Rounding out the top three is the championship’s leader thru the first three days of competition. Kong, who was celebrating her 18th birthday, recorded her highest score of the week on the final day (77) posting a final score of 289 (-3) only one stroke behind Lim.

The Capilano Golf and Country Club member struggled early on, double bogeying back-to-back on holes 5 and 6, and would not be able to recover on the back half shooting 1-under. Her efforts would, however, be enough to earn her the final spot on the team named to Nationals.