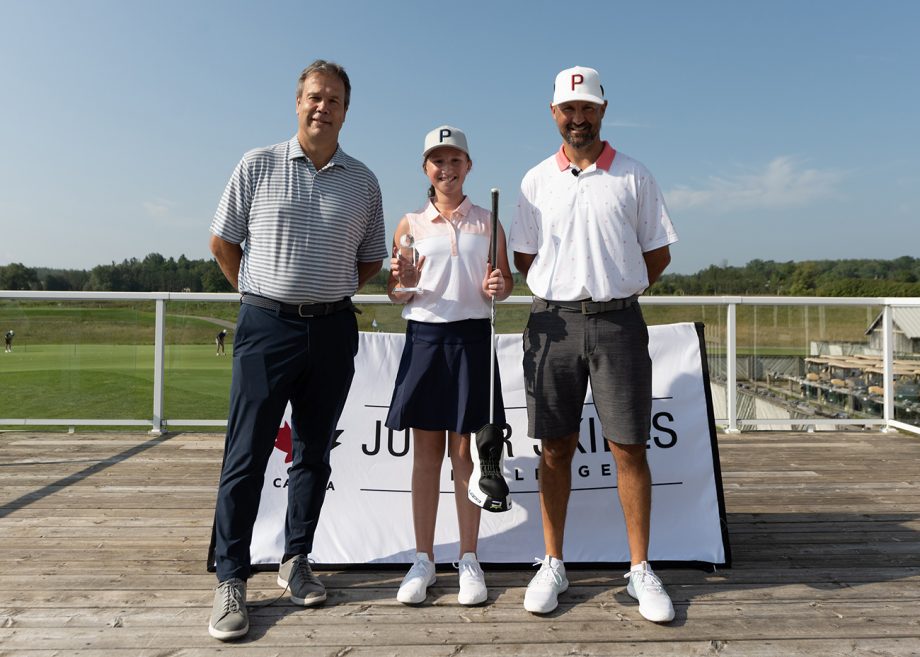 The 12th edition of the Junior Skills Challenge National Event is in the books.

Played at the picturesque TPC Toronto at Osprey Valley in Caledon, Ont., a selection of top Canadian junior golfers showcased their skills in one of Golf Canada’s signature events. In partnership with the PGA of Canada and Cobra-Puma Golf, this event saw participating golfers compete in putting, chipping, and driving competitions. It culminates a year-long process, which consisted of 80 qualifying events across Canada and 1,500 junior golfers.

The winners of the Junior Skills Challenge National Event received prizing courtesy of Cobra-Puma Golf with the winners of the 15 to 18 age groups receiving exemptions into their local NextGen Championship in 2022.

Below are the winners in each of the age groups:

Four participants competed in the Girls 8 and under division. Emily Joy (The Glencoe Golf & Country Club) of Calgary finished in first place with a score of 115, dominating the putting portion with a 40 on the 5-feet and 30 on the 10-feet.

Eily Kim (Pitt Meadows Golf Club) of Burnaby, B.C., placed second, with a total of 100. Kim, like Joy, also had a strong putting performance, posting a 40 on the 10-feet competition.

One of the closest competitions during the Junior Skills Challenge was the Boys 9 to 11 division. Calgary native Luke MacDonald (The Glencoe Golf & Country Club) secured the title with a 185 score, thanks in large part to his driving (multiple 30 scores) and putting (40 on the 5-feet).

Former Drive, Chip and Putt champion Alexis Card (Galt Country Club) continued her strong play with a complete performance, winning the Girls 9 to 11 division with a score of 205. The Cambridge, ON native shined in the driving portion of the event, posting 30+ point scores in the first, second and third driving competitions.

Jager Pain (Eagles Nest Golf Club) recorded the best score out of any golfer at the Junior Skills Challenge on Sunday, posting a score of 265. Winner of the 2018 MJT Ontario Series tournament, Pain delivered impressive scores in the driving and putting portions, recording 30 and above with the driver and all ’40s with the putter.

The Girls 12-14 division came down to the wire, with all four golfers separated by just 25 points.

Tatum Lohnes (Osprey Ridge Golf Club) came out on top with 160, which included a 40 on the 5-feet putting portion. Sitting in second just five points back of Lohnes was Claire Hu (Whitlock Golf and Country Club), who demonstrated her impressive driving abilities with two scores in the 30’s.

Like Jager Pain in the Boys 12-14 category, John Kingdon (Sawmill Golf Course) had multiple 40 scores en route to winning the Boys 15-18 competition. The Grimsby, Ont., native recorded scores of 40 in two of the driving events and the 5-feet putting competition. Last season, Kingdon won two tournaments on the Golf Ontario circuit; the US Kids Niagara—Southbrook and U15 NDJT Bridgewater.

Fresh off of winning the 2021 Ontario Juvenile (U17) Girls Championship Title in Windsor, Ont., Joline Troung (Trafalgar Golf & Country Club) captured top honours in the Girls 15-18 event at the Junior Skills Challenge. The Mississauga, Ont., native posted a score of 230, the best among the Canadian girls competing at TPC Toronto. Troung’s best individual score was a 40 in the 5-feet putting competition.

In second place was Ava MacDonald (Antigonish Golf Club) with a score of 175. MacDonald, like Troung, also recorded a 40 in the 5-feet putting portion.