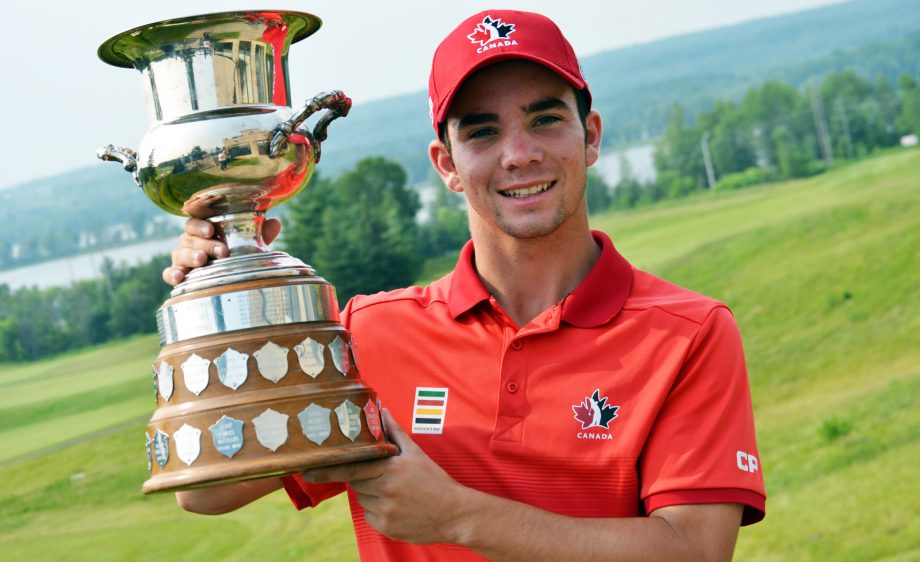 Papineau, a two-time Québec junior champion, posted a cumulative score of 140 (-4) to enter the sudden-death playoff against Pierre-Alexandre Bédard of Chibougamau-Chapis, Qué., and Scott Ray of Ottawa—also the president of host club Camelot.

With the group still all-square on the second playoff hole, 18-year-old Papineau made his mark with an approach shot that landed inches from the hole. From there, the St-Jean-sur-Richelieu native tapped-in for birdie and the win.

“I was so nervous; it felt like I was carrying 200 pounds on my shoulders,” said Papineau. “When I saw the ball sink into that cup, I started breathing easy again.”

The win adds to Papineau’s impressive summer, which includes a T10 finish for Canada at the Toyota Junior Golf World Cup in Japan last month. He will look to keep up the strong play this weekend at the Duke of Kent tournament—the second of leg of the men’s triple crown of amateur golf in Québec.

The “Tunis” is the most prestigious amateur tournament presented in the Ottawa region. The men’s Triple Crown is composed of the Alexander of Tunis, Duke of Kent, and Men’s Provincial Amateur Championship. The three (3) best players on the Triple Crown’s Order of Merit will form the provincial team representing Golf Québec at the Canadian Men’s Amateur Championship to be held at the Weston Golf & Country Club and Lambton Golf & Country Club, in the Toronto area, from August 10 to 13. Practice rounds will be held on August 8 and 9.