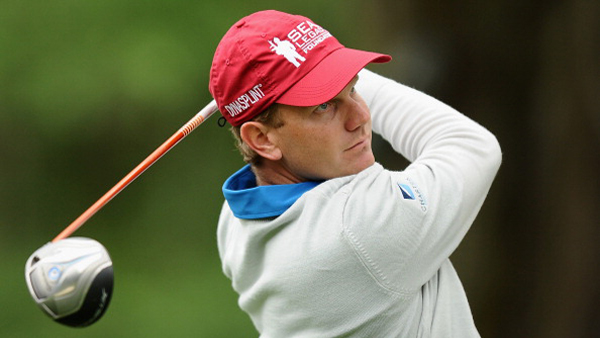 WHITE SULPHUR SPRINGS, W.Va. – Billy Hurley III has been waiting for a breakthrough moment on the PGA Tour. On Independence Day, the former U.S. Navy officer might have set himself up for one this weekend in the Greenbrier Classic.

Hurley shot a season-best 7-under 63 on Friday to take the second-round lead.

Hurley’s bogey-free round included a chip-in from 29 feet on No. 4 in cool conditions before the wind picked up considerably late in his morning round.

“You know, anytime you play good, it’s great, right?” Hurley said. “There’s special days of the year for our country, and having served … adds something to it. It’s kind of pretty cool, I guess, to shoot 7 under on the 4th of July.”

It’s a nice storyline. Then again, having military experience wasn’t on his mind in jumping to the top of the leaderboard.

“I was just trying to keep getting the ball in the hole,” he said.

Hurley was at 9-under 131 at Old White TPC. Eleven players were within four shots of him.

Kevin Chappell (65) and Chris Stroud (66) were a stroke back. Troy Matteson

Troy Matteson had a 61 to vault into fourth place at 7 under. He has made the cut in all five years of the Greenbrier Classic.

Hurley graduated from Annapolis in 2004 and spent five years in the Navy. He playing golf sparingly while stationed in Hawaii and worked out as much as he could.

Being mentally tough on the course comes easy for Hurley, whose missions included steering a Navy destroyer through the Suez Canal.

Playing partner Chris Stroud said it was “special” for a former military man to be leading the tournament and was amazed at how Hurley could recapture his golf game.

“There’s a lot to be said about that,” Stroud said.

Hurley rejoined the PGA Tour this season and has three top 10 finishes so far, including a tie for eighth at Congressional last week. His best career finish is a tie for fourth in the AT&T National two years ago, also at Congressional.

A solid ending at The Greenbrier resort would get him into the British Open later this month. The four best finishers not previously eligible among the top 12 on the final leaderboard will earn spots in the July 17-20 tournament at Royal Liverpool.

Chappell’s round included holing a 35-yard pitch on the par-3 15th after a poor tee shot.

Chappell’s only top 10 finish of the season came at Colonial. But this week, he’s at ease amid the mountains, Howard’s Creek running through the Old White TPC and the rest of the resort’s atmosphere.

“You know, the course has a great flow to it, just at peace out there,” he said. “All the running water and all the good scenery just puts me in a good spot.”

Matteson holed a 35-yard pitch on the par-3 15th and needed just 19 putts – one shy of the PGA Tour record held by eight players.

“It was unlike any day I’ve had this year,” said Matteson, who had missed the cut in 11 of his previous 13 tournaments. “I just haven’t been getting it in the hole all year, and to have a day like this really kind of turns things around.”

Bubba Watson was among five players at 5 under. He shot 67.

First-round leader Jonas Blixt had three early bogeys and shot 73 to drop into a tie for 25th at 3 under.

FexEx Cup points leader Jimmy Walker (75) was among those who missed the cut. He finished 5 over.

Ninety players advanced to weekend play at even par or better. Patrick Rodgers shot 75, but at even par for the tournament he made his third straight cut since turning pro.

On the Canadian side, David Hearn shot 66 to end the round tied for 13th. Stephen Ames follows behind with a 68, tying him for 25th. Both Brad Fritsch and Mike Weir failed to make the cut and advance to weekend play.