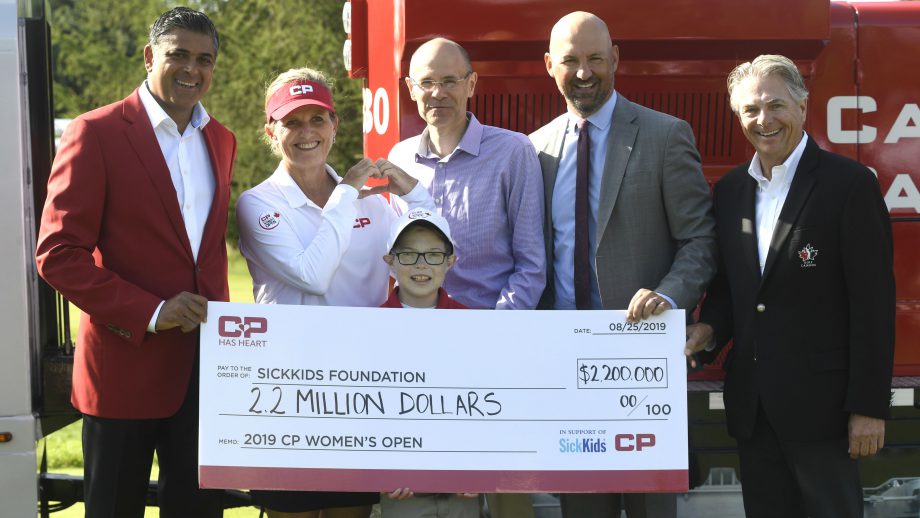 Earlier today, a $2.2 million cheque was presented to the SickKids Foundation. These funds will go towards upgrading a Cardiac Operating Suite at SickKids. The total contribution to SickKids is the result of several fundraising efforts, all under the CP Has Heart program. Through CP Birdies for Heart, CP contributed $5,000 for each birdie made by a player on the 17th hole during tournament play. Fans were also able to pledge a donation amount or per birdie donation to be matched. A total of 43 birdies represents a $215,000 donation. CP also supported the tournament host community this year with a $250,000 donation to Southlake Regional Health Centre in Newmarket, Ont. to support paediatric cardiac care.

“I would like to congratulate every golfer, fan and volunteer for their contribution to this year’s CP Women’s Open,” said CP President and CEO Keith Creel. “It was a tremendous week of golf, but more importantly, together we have made a significant contribution to SickKids Foundation and to Ontario, a key province in our network. CP is proud to continue to make a difference in communities across Canada through our community investment program, CP Has Heart.”

“We are incredibly grateful that CP, Golf Canada and the CP Women’s Open have chosen SickKids Foundation as their beneficiary this year,” said SickKids Foundation CEO Ted Garrard. “It’s been a remarkable partnership and we thank all supporters involved, on and off the golf course, for their generosity. Funds raised from the tournament will continue to help cardiac patients at SickKids receive world-class care.”

The 2020 CP Women’s Open will be played on the West Coast, at Vancouver’s Shaughnessy Golf and Country Club, from August 31 – September 6, 2020.