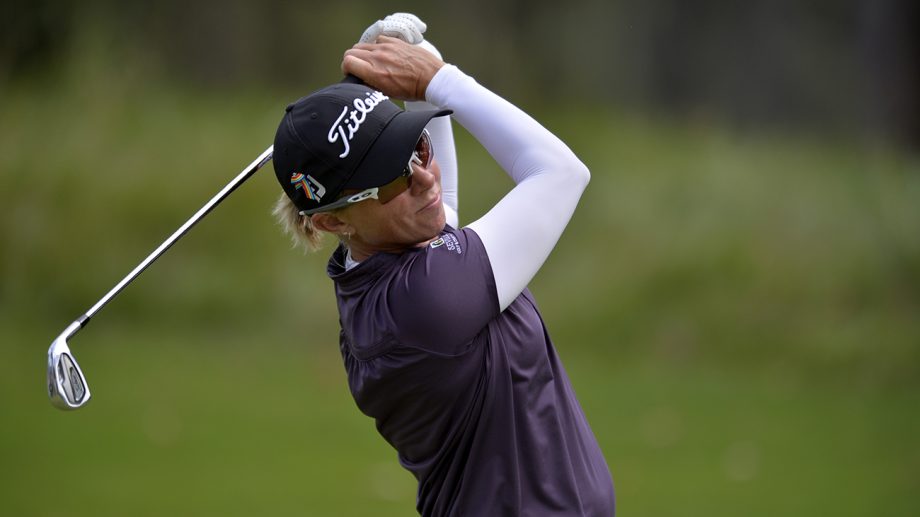 And then the birdies came in bushels, one after another, six straight to close her second round that put her in the record book with a 9-under 63 and gave her a one-shot lead over Lizette Salas going into the weekend.

“Golf is easy when you have days like this,” Korda said. “But it’s not always like this.”

It sure seems that way of late. Korda shot 62 in the third round last week on her way to winning the Meijer LPGA Classic, making the 22-year-old American the first multiple winner on the LPGA Tour this year.

Over her final six holes on the front nine, Korda made birdie on both par 3s guarded in front by water. She had eagle putts on consecutive holes – one of them on the par-4 sixth, with the tee moved up to make it play 229 yards – and narrowly missed them both.

On the hardest hole on the course, she had to deal with a tree root in front of her ball to get to the green and then made a 45-foot birdie putt. Korda closed out her round with a pitching wedge into 8 feet.

Korda tied the championship record, last set a year ago when Sei Young Kim closed with a 63 to win at Aronimink. She had the third round of 63 at Atlanta Athletic Club in a major, joining Steve Stricker in 2011 and Mark O’Meara in 2001 at the PGA Championship.

And Korda still has work left in front of her if she wants to win her first major.

Salas didn’t come close to a mistake with her steady diet of fairways and greens. That was her plan coming in, and the 31-year-old American has executed it brilliantly.

“I’m definitely satisfied,” Salas said. “We came in with some goals, and we’re reaching them. I think overall my attitude has been pretty solid. It’s a major. It’s supposed to be tough. It’s supposed to test you in several different ways, and I think I’m handling it quite well. And back-to-back 67s, I’m not going to complain.”

Celine Boutier of France drove the sixth green to 8 feet for an eagle on her way to a 64 that left her four shots back at 7-under 137 with Cydney Clanton (67) and Hamilton’s Alena Sharp (68).

Still lurking was seven-time major champion Inbee Park, rounding into form as she goes for another gold in the Olympics, who holed a chip for eagle and shot 68. She was six behind.

Korda, with five LPGA Tour victories, has never won back-to-back and spoke about how draining it was earlier in the year after she won at Lake Nona.

Having spectators on the Highlands course has helped, and she gave them plenty to cheer with her 10 birdies, which followed her lone bogey at the start of her round at No. 10.

She found them, including two reachable par 5s and the drivable par 4.

Korda’s big finish began with a 7-iron to 20 feet. She followed that we a 7-wood onto the green at the par-5 fifth – her caddie told her not to go at the pin, but she couldn’t resist – and then the 7-wood to the green at the reachable sixth and her best shot of the day, a 5-iron to 5 feet on the par-3 seventh.

The surprise was the big putt on No. 8, and the final birdie was the ideal way to close out a round like that one.

Korda isn’t one to linger on the previous week, even if it resulted in a trophy.

“They’re two completely different golf courses and two different strategies. It’s just good golf that I’ve been playing, and hopefully I can continue on with that.”

Maria Fassi lost two strokes to a penalty for slow play, turning a birdie into a bogey on the 18th as she made the turn. The former NCAA champion from Mexico had a 77 and she missed the cut by one shot.