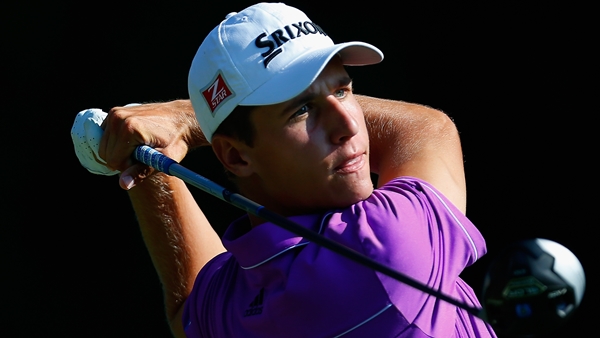 BETHESDA, Md. – The young Australian at the top of the leaderboard is so new to the PGA Tour that he couldn’t get into the clubhouse.

Playing in his second event as a professional, 20-year-old Oliver Goss shot a bogey-free, 5-under 66 Friday in the second round of the Quicken Loans National, putting him in a tie for first with Patrick Reed, Ricky Barnes and Marc Leishman at 6 under at the halfway point.

If nothing else, the performance should erase any doubt that he belongs in the building – something he had trouble proving earlier this week.

“I tried to get in the clubhouse,” Goss said, “and the security guy was like, `Hey, where’s your credential?’ I said, `I don’t have a credential, but I’m a player and I’ve got an exemption.’ He said, `Well, I can’t let you in.’ I was like, `I’m a player, though.’ Still wasn’t good enough for him, which shows just how good the security is around here.”

The former University of Tennessee player laughed off the episode, especially after solving the problem the tried and true way: He found another door.

“I just had to walk around the other side of the clubhouse,” he said. “I got a credential now, so I’m all set.”

Goss was the low amateur at the Masters in April but missed the cut at the U.S. Open. He also failed to make the weekend in his first event as a pro, last week’s Travelers Championship. He’s not only seeing the Blue Course at Congressional for the first time, but he also took a side trip into D.C. to get his first look at the nation’s monuments.

“It’s such a different experience, it’s so surreal,” he said. “They are just ginormous, those things.”

Half of the quartet of leaders is Australian. In addition to Goss, there’s Leishman, who also shot at bogey-free 66 that included an unconventional birdie at the long par-5 ninth.

Leishman put his tee shot in the left rough, where he had a bad lie and a tree in the way of his backswing. His second shot went all of 50 yards and stayed in the rough.

But his sand iron from 127 yards landed on the green and spun back into the hole, giving him some momentum for the back nine.

“It’s a pretty unlikely birdie,” he said. “But they don’t happen very often, and you have to make the most of them when they do.”

Leishman, whose only PGA Tour win came at the 2012 Travelers, will be in an all-Aussie pairing with Goss on Saturday.

“I haven’t had a whole lot to do with him,” Leishman said before learning of the pairings. “I spoke to him a little bit last week at the Travelers. We have a practice round lined up next week at the Greenbrier, so I get to spend a bit more time with him there. But, who knows, we might have a tee time on the weekend.”

Yet another player from Down Under, Stuart Appleby, was one shot off the lead.

Now that he’s a father, Patrick Reed can get back to proving he’s one of the top five players in the world.

Reed shot a 68 for the second consecutive day for a share of the lead, only the second time he’s made the cut in his last six tournaments.

Reed said he was distracted by the birth of a daughter, Windsor-Wells Reed, about a month ago.

The blessed event means that Reed’s wife, Justine, hasn’t been caddying for her husband recently.

“She’s going to come back,” Reed said, “just whenever she feels more comfortable, and whenever we feel like it’s the right time with the baby and everything.”

Reed caught some flak for declaring “I’m one of the top five players in the world” after winning the World Golf Championship at Doral in March, his third PGA Tour victory in seven months. He’s got some work to do to get there: He’s slipped to No. 29.

“After our last win, we’ve been itching for our little girl to come see us, and now she’s finally here,” Reed said. “So it’s been great. It’s been better for me probably than golf-wise, that’s for sure.”