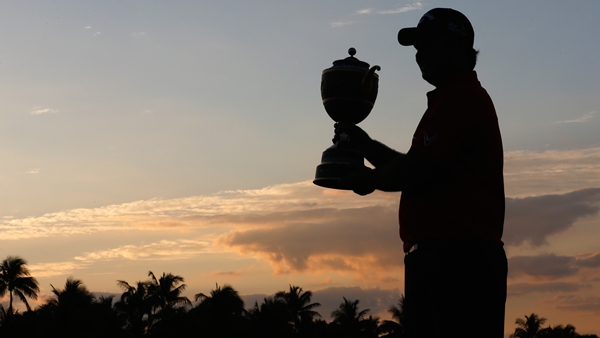 DORAL, Fla. – The road to the Masters is just getting started, and already two players have combined to win five times on the PGA Tour.

How many would have guessed Jimmy Walker (three wins) and Patrick Reed (two wins) when the wraparound season began in October?

In a moment of bravado on national television after he went wire to wire (with ties) to win the Cadillac Championship, the 23-year-old Reed said, “I’m one of the top five players in the world. I feel like I’ve proven myself.” He has won twice this season, three times dating to August.

Reed and Walker are the latest newcomers to winning on the strongest tour in golf. Harris English won in Mexico last November for his second PGA Tour title in six months. Jordan Spieth won in July, and he started this year by giving himself three chances to win.

It’s just another example that winning is getting hard, even for those who are used to winning a lot.

Each season seems to bring a new crop of younger players who have a lot of game and no fear. Russell Henley won the Sony Open in his debut as a PGA Tour member. Just over a year later, he overcame a two-shot lead playing with Rory McIlroy in the final group at the Honda Classic and won a four-hole playoff.

The last three winners of the World Golf Championships – Dustin Johnson, Jason Day and Reed – are all in their 20s. Ten of the 17 winners this season are in their 20s. That includes 26-year-old Chesson Hadley, who won the Puerto Rico Open on Sunday about the time Reed was beating the strongest field so far this year at Doral.

“Look at Russell Henley – he’s won twice,” Reed said. “Harris English has won twice, Jordan Spieth won once. Myself, I’ve won three times. It’s just one of those things that we’ve worked very hard – all of us – to get where we are. And it’s definitely shown what we are doing is working. To see the young guys coming out and playing and putting it to the veterans is always nice.”

Walker turned 35 in January, so it’s hard to consider him one of the younger players. Then again, injuries slowed the start of his career. And once he finally won at the Frys.com Open to kick off the new wraparound season, he has made it a habit. Over the weekend, Walker talked about new opportunities that have come his way following his three wins. He’s not interested in anything but playing good golf.

Now that he has tasted winning, his appetite is only growing.

Remember, it’s still only March. The first of four majors has yet to be played. Reed has never even played in a major.

He rubbed a few people the wrong way when he declared himself among the top five in the world (he’s actually No. 20). It showed what he thought about his game and that he’s not afraid to say it.

So if he’s top five, who are the other four?

And that was as far as he got before he smiled and said, “You know, good question. I said top 5. I didn’t know where I was going to be in the top 5.”

He then went on to mention Masters champion Adam Scott (No. 2 in the world) and Mickelson (No. 5). He mentioned how impressed he was with Graeme McDowell, and having played Saturday with Johnson, he acknowledged how good he could be when he gets on a roll. And the list stopped there, right when it was starting to grow.

The ranking (determined over two years) has Henrik Stenson at No. 3, Day at No. 4, McIlroy at No. 6.

It was clear that “top five” was more figure of speech than an actual number. Anyone’s list of “top five” is likely to include as many as 10 players these days.

Years ago, Colin Montgomerie jokingly said that it was hard to win majors because Woods usually won two of them, Mickelson, Vijay Singh or Ernie Els won another and that left only one for everybody else each year.

Twenty-one players have won the last 24 majors. That would seem to make it even harder.

It’s getting that way for regular PGA Tour events, too.