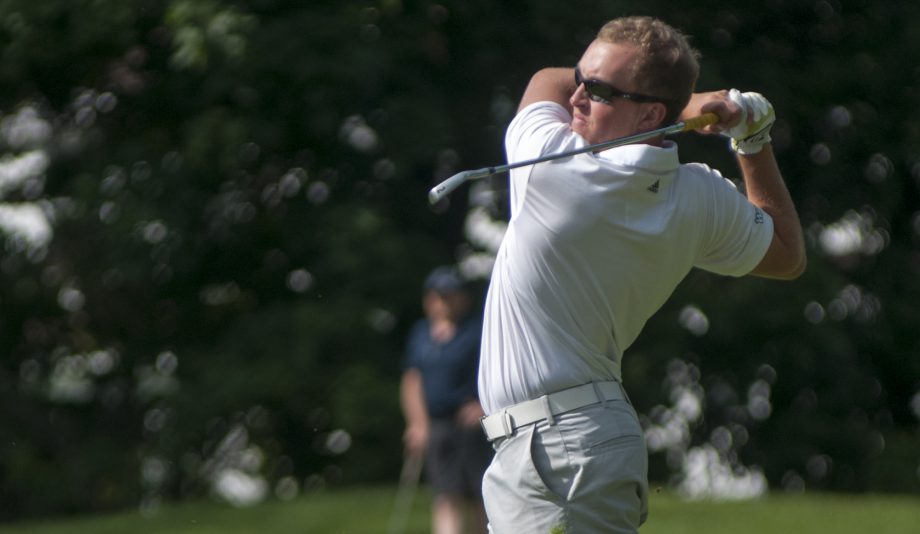 GATINEAU, Que. – Blair Bursey conquered hot and windy conditions to claim the early lead in the 112th playing of the Canadian Men’s Amateur Championship. The Gander, N.L., native managed the feat at Eagle Creek Golf Club in Dunrobin, Ont., and holds a three-stroke advantage heading into his second round to be played at The Royal Ottawa Golf Club in Gatineau, Que.

“It was a good round, but I started off a little shaky,” reflected Bursey. “Once I felt my way into it, things just came fairly easily. Not often does a round like that come around, so it was pretty special. To finish with an eagle was a great way to go out. I hit two of my best shots of the day on that last hole. It was a good way to start the tournament, but that’s all it is right now: a solid start. With three more days to go, hopefully there’s more solid golf coming up.”

The 19-year-old notched a pair of birdies for a 2-under front nine performance. He went on to tally four more birdies on the day before adding an eagle on the par-5 No. 18 for a bogey-free, 8-under 64 showing.

Bursey now heads to The Royal Ottawa Golf Club for his second round – a course which boasts two of the biggest moments in Canadian golf in its storied legacy. The roots of Golf Canada – the sport’s national governing body – were firmly planted at this historic venue in 1895 before it played host to the inaugural Canadian Men’s Amateur Championship later that year.

“I had one practice round there and I absolutely loved the golf course,” said the Utah Valley University junior when asked about the shift to the second co-host. “It’s traditional and I just love it. It’s an honour to be here. I think Golf Canada having the Men’s Amateur here is such a pleasure for all the players. I’m definitely excited to head over there tomorrow.”

Of the 16 players currently within the Top-10, 15 played their opening rounds at Eagle Creek alongside Bursey. Despite the challenge ahead, he remains confident and focused.

“I was just trying to hit good quality golf shots. I wasn’t expecting to shoot a low-60s round, I wasn’t setting a number. I was just going about my business and it just happened to fall in today. I don’t expect it to be like that every day, but if I can put the ball in the right position, keep a good outlook and continue to execute, good things will come my way. My best stuff today showed through, if I can just continue to do the best I can, that’ll be good enough by the end of the week.”

Holding shares of second are Winnipeg’s Marco Trstenjak, Napanee, Ont., native Josh Whalen and Andy Zhang from China, who resides in Winter Garden, Fla. The trio sit three strokes off the lead and will join Bursey at The Royal Ottawa Golf Club.

Team Newfoundland and Labrador finished with a team total of 4-under 140 to open the two-day inter-provincial team competition for the prestigious Willingdon Cup. The team of Bursey and St. John’s, N.L. natives Chuck Conley and Nathan Peters will look to dethrone Team British Columbia to secure its first team title. Teams Alberta and Ontario trail the Maritime province by two strokes.

Competitors will complete their second rounds having played both host clubs. The field will be reduced to the low-70 and ties for the two final rounds to be contested at The Royal Ottawa Golf Club.

In addition to capturing the 2016 Canadian Men’s Amateur Championship, the winner will earn exemptions into the 2016 U.S. Amateur at Oakland Hills Country Club in Bloomfield Hills, Mich., and the 2017 RBC Canadian Open at Glen Abbey Golf Club in Oakville, Ont. The champion will also be eligible to receive an exemption into the U.S. Junior Amateur, the U.S. Mid-Amateur or the U.S. Senior Amateur, if applicable.