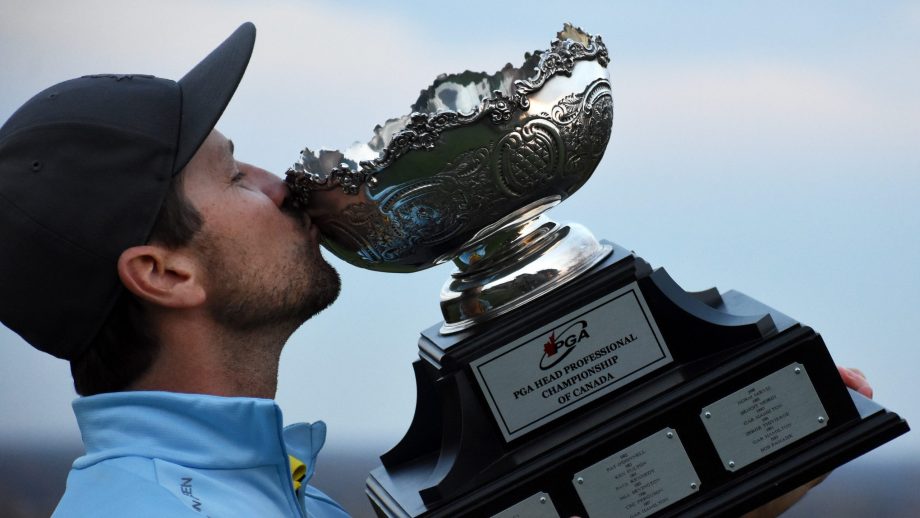 Fonthill, Ont. – When Nick Kenney’s second shot on the par-5 12th hole at Lookout Point Country Club hit the cart path and sailed 50 yards over the green, just minutes after Dean North hit it to tap-in length on the hole prior to get within two, it looked like the momentum may have been shifting at the PGA Head Professional Championship of Canada.

From behind the green, he blindly hit his next shot, with the green running away from him, to five feet – where he would make his birdie putt and take a four-stroke lead of the championship.

The National Golf Club of Canada Head Teaching Professional never looked back, making three more birdies on his way into the clubhouse to win by four strokes over Danny King and defending champion Gord Burns.

“I don’t think it’s settled in yet,” said Kenney with the trophy in hand. “I think by far this is the biggest win of my career so far. This is the first time I’ve played the Head Pro Championship, so to be the champion with some of the others on that trophy, it hasn’t settled in yet, but it’s quite an honour and I feel so lucky to have won.”

Kenney noted that this was the first time he has been in a situation with a chance to win since the 2019 PGA of Ontario Zone Championship, which he thought back to and had a similar mindset, trying to get as low as possible.

“I figured I had to keep going under par,” said Kenney, who takes home $9,000 with the victory. “I had a great feeling this week and my putter felt good in my hands. You have to think about every shot at this golf course, which really kept me in the moment, and I was able to execute.”

Kenney also noted that he received lots of support between the first and final round – which continued into the post-round celebration.

“Every pro I’ve worked with and all my friends and family, I’ve heard from all of them, and with social media these days, it has really brought my friends and family into the mix a little bit,” said Kenney. “I briefly looked at my phone, I have lots of messages to get back to, and it’s amazing they get to see what is going on.”

Moreover, a relatively recent father, Kenney notes how their support and having them in his life has changed his mindset playing tournament golf.

“Being a parent puts everything in perspective. Having kids now, you appreciate everything, and it calms you down on the golf course,” said Kenney. “The pressure isn’t quite there. if I don’t perform, I’m not too upset and I’m a role model for them as well.”

Lookout Point Country Club, which is set to celebrate its centennial season in 2022, was a true test of golf this week, with only four players finishing the week under par. In addition, 30 volunteers, most of whom are members at the club, stepped up to help put on the terrific event which was hosted for the first time in Canada since 2003.

“The golf course, volunteers and sponsors stepped up big time,” noted Kenney. “For the volunteers to come and sit out for hours and show us where our golf balls are and give up their golf course for four days, it was incredible. I had heard nothing but good things about Lookout Point and now it holds a very special place in my heart. I can’t wait to come back here.”