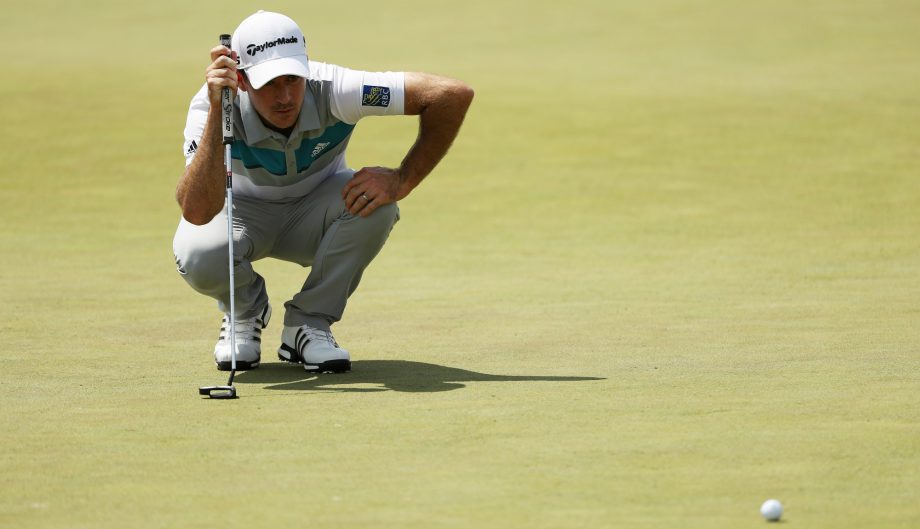 David Lingmerth is one of a few players in the Quicken Loans National field with any memories to draw on at TPC Potomac – and they’re the best kind of memories.

The winner of a 2012 Web.com Tour event on the tight, tricky layout near Washington, Lingmerth once again relied on his accuracy off the tee Thursday to shoot a 5-under 65 and take the first-round lead.

The 29-year-old Swede, who doesn’t have a top 10 finish on the PGA Tour this season, hit 12 of 14 fairways, which tied for best in the field. Starting on the back nine in the afternoon, he made five birdies in a seven-hole stretch beginning at the 13th hole, three of them from inside 7 feet.

“I feel like that’s kind of one of my strengths, a thing I pride myself in, hitting a lot of fairways,” Lingmerth said. “I like this type of golf course when you can see the definition, you can zone in on your targets. You’ve really got to stay committed off the tee.”

He won the 2015 Memorial Tournament for his lone PGA Tour title.

Troy Merritt, the winner two years ago at Robert Trent Jones Golf Club, was a stroke back along with Marc Leishman, Johnson Wagner, Sung Kang, Nick Taylor and Daniel Summerhays.

Taylor, from Abbotsford, B.C., was the low Canadian.

Well, that was fast.

TPC Potomac is hosting the event for the first time and has been extensively redesigned since it last welcomed the PGA Tour in 2006. It presented a stern test amid sunny, breezy conditions Thursday. Slight misses off the tee were punished severely and, as the weather heated up, even wedge shots were bouncing and releasing on the greens.

Leishman, the big-hitting Australian who won the Arnold Palmer Invitational this year, welcomed the challenge.

“It’s getting pretty baked, which is great. It feels a lot like Melbourne, actually,” Leishman said. “You can hear that real, you know, the hard sound when the ball hits the green. You’ve got that purplish colour, especially by the end of the day. It’s great. I’m enjoying it.”

On the 626-yard, par-5 second hole, Leishman’s 355-yard drive left him with a decision that few players had to confront. He watched his playing partners lay up and waited for the green to clear. He pulled out a 3-wood and then put it back in the bag. He also considered laying up with a 9-iron.

Ultimately, he settled on a 3-iron that he pulled slightly into a massive bunker in front of the green. No worries, though: He blasted out to 12 feet and made the putt for birdie.

The Quicken Loans is a home game of sorts for Leishman, who lives in Virginia Beach, Virginia. He drove his own car to the Washington area Tuesday and is staying with friends. His wife, Audrey, is home with their two sons. She’s also expecting their third child, due next week. Two years ago, Audrey nearly died from toxic shock syndrome

“We were just hoping she would survive and she survived, and we were hoping she would get somewhere back to full strength and she’s done that,” Leishman said. “Yeah, pretty exciting time for the Leishmans. Hopefully, she’ll hold out until next week and we can finish this tournament and go home and be a dad for a couple weeks.”

Leishman played alongside Rickie Fowler, the top draw at a tournament that is missing most of golf’s stars. Fowler was 3 over through two holes but rallied with four birdies to get back to even par after his first nine. He saved par from 8 feet on the sixth hole and 14 feet on the eighth to shoot 70.

Holing out from everywhere.

Wagner reaped the rewards of a four-hour practice session Wednesday. At one point he was hitting mid-iron shots from the short-game area through a gap in the trees to the driving range while caddie Matt Hauser watched. They’d come up with a swing thought that was working and he wanted to hit a few more balls.

“I’ve just been struggling with really striking the golf ball the last few months,” Wagner said. “Finally we hit something that really, I could repeat in my head out there today.”

The former Virginia Tech player was back on the putting green Thursday afternoon, grinding over 75-footers. At 140th in the FedEx Cup standings, he could use a big week to lock up his PGA Tour card for next season.

“I’ve been in this situation a bunch,” Wagner said, “and I’m not overly stressed about it.”

The intensity of his practice suggested otherwise.